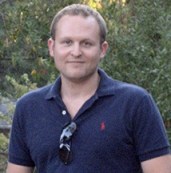 At age 7, he discovered Visual Basic in Microsoft Excel. At age 13, he was studying computer science at Stanford University. By the time he turned 20, he was an expert at the Microsoft technology stack — ASP.NET, C#, MS-SQL — as well as standard languages like PHP, XHTML and Java. He was ready.

Fresh out of school, Hamachek worked for a number of recognizable startup companies in the Bay Area, including Coupons.com, RelayHealth and StorSimple. It was at Coupons.com, however, that he started working on mobile applications — namely its Grocery IQ app, which went on to become the No. 1 app in the Lifestyle category in the Apple App Store.

“Developing for mobile has always been a huge interest of mine,” he says. “The combination of facts that most people always have their cellphone and that devices are nearly always connected to the internet opens up tremendous possibilities for developing great software.”

On a mission, he founded SynergeTech Solutions in 2009 to build Windows Mobile software. In the last two years, it has released eight applications for the platform, including Google Voice Dialer, Craigslist Mobile, Tweets Near Me and Windows Mobile Call Block. But Hamachek wasn’t ready to settle down. Last year, he launched Who’s Near Me, a location-centric tool that connects users with people who are not their friends so they can meet new people and share interests.

Who’s Near Me shows users other people who are nearby at the time, allowing them to communicate with them anonymously via private messages, group chats and local news feeds. They can even send virtual gifts and stream tweets from Twitter. The service currently has over 328,000 users, even though it’s exclusively available on the Windows Phone platform. 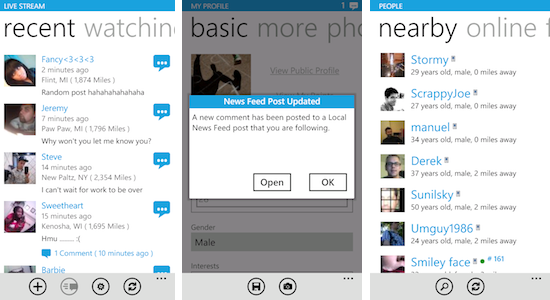 Now that he has achieved a level of notoriety, Hamachek is looking ahead to see how he can use Windows Phone to push the envelope of what’s possible with mobile applications.

“In many ways, we are still looking at mobile as an extension of the web and not as the replacement for the web that it will become,” he says. “I think that location will be a huge enabler for this software, especially as concerns over privacy subside.”

While Hamachek agrees that iOS and Android dominate in terms of reach and sheer number of feedback-generating users — he plans to release Who’s Near Me on both soon — he still predicts a sea change.

“The largest advantage that Windows Phone offer is development tools,” he says. “The development environment that Microsoft has created for Windows Phone 7 — the Visual Studio, Expression Blend — is the most conducive tooling for writing code that is both quick to create and also aesthetically beautiful.”

Hamachek is a confirmed member of the Windows mobile community these days, having developed or contributed to more than 10 mobile applications, many of which have won awards and high marks from critics. He’s also contributed to early open-source libraries for the Windows Mobile platforms and has done his best to guide other developers through the migration to mobile. His goal now: to stay on the bleeding edge of mobile while expanding current projects.

“I’ve just recently begun to think about raising money to support Who’s Near Me’s future growth,” he says. “The location, social, mobile space is heating up extremely quickly and it’s become apparent to me that the time to expand to iOS and Android is now.”

Hamachek is working on putting together an advisory board so he can start seeking out angel investors interested in innovative mobile social apps that capitalize on location.