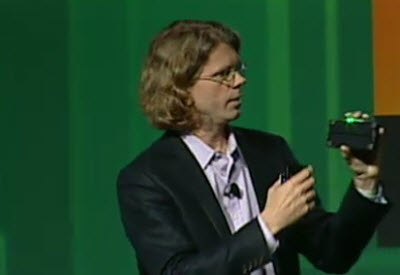 Ford and Bug Labs announced today they are creating a platform that will encourage users to modify computers in the automaker’s future cars, bringing together the creativity of computer hackers and car tinkerers.

The companies are launching an open-source in-car research and development platform called OpenXC. The platform is based on Bug Labs’ open-source Bug System. Ford and Bug Labs made the announcement at the TechCrunch Disrupt 2011 conference in San Francisco.

“You can use this to create your own personalized driving experience,” said Pete Semmelhack, chief executive of Bug Labs, an open source hardware and software firm founded in 2006.

Bug Labs makes the tools and support needed to prototype, pilot and produce networked devices. The platform will allow developers to quickly prototype ideas and test out affordable new connectivity ideas. One of the ideas is a fuel economy monitor, which Semmelhack is holding in the picture above. 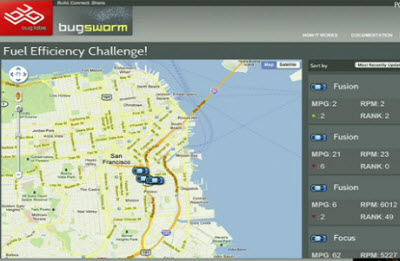 The fuel economy monitor can be socially networked, allowing you to see your car and your friends’ cars on a map. It will show images of the various Ford vehicles on the road and how they are doing at fuel economy.

“You can see which driver will have the best fuel efficiency,” said Semmelhack.

The monitor is connected over 3G to the internet via Bug Labs’ cloud-based service, Bugswarm. The idea behind OpenXC is to create a platform that is accessible to developers and incorporates local market needs at a low price, said K. Venkatesh Prasad, senior technical leader in the Infotronics division at Ford Research and Innovation. 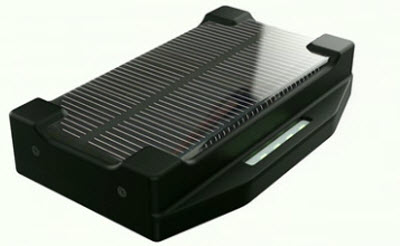 Users can take the platform and create personalized interfaces for visual or audio feedback. And the Bug Labs hardware modules, like the fuel economy monitor above, can be snapped directly into the computers in Ford vehicles. You can remove the module and plug in another one to change the functionality of the car computer.

Ford has already sold millions of cars with its Ford Sync car computer, which can connect to the web wirelessly, recognize speech commands, and let drivers talk hands-free on a cell phone.

Prasad got the idea for OpenXC when he took a trip to India, where he saw that most people couldn’t afford a car but had some kind of affordable feature phone with a lot of functionality. Bug Labs will release the software development kit for the platform later this year.

The OpenXC platform also gives Ford the freedom to explore other business models, such as adding an app store, where certified developers can offer up their Ford-approved innovations to consumers, who can buy them in a safe and fun environment (as long as they keep their eyes on the road).