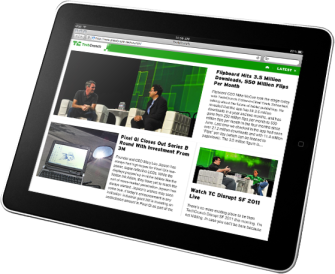 The company re-renders online publications into more reader-friendly versions that run on tablet computers like the iPad. The sites are optimized for the swipes and taps that dominate tablet usage instead of traditional pointing and clicking.

Publishers can plug content feeds like RSS, content management systems and Twitter into Pressly’s online web application. Pressly then builds the site on its end with either a custom or default template. Pressly can build a tablet-optimized website in around three days, Pressly co-founder Jeff Brenner said.

Pressly can also deliver different types of advertisements optimized for tablets, similar to how it renders online publications. The company expects to use a revenue-sharing model with advertisers, as well as sell full-screen tablet-optimized advertisements. But judges were skeptical that the service will be able to compete with other tablet reading applications like Flipboard.

“I don’t think your product will make a difference in the field,” Facebook co-founder Dustin Moskovitz, a Flipboard investor, said on stage. “The problems you’re addressing are very fixable.”

Brenner pointed to the company’s reliance on HTML5 — a successor to Flash, which powers most web applications — as its main competitive advantage. That means Pressly will work on any mobile device with a web browser that runs HTML5 apps.