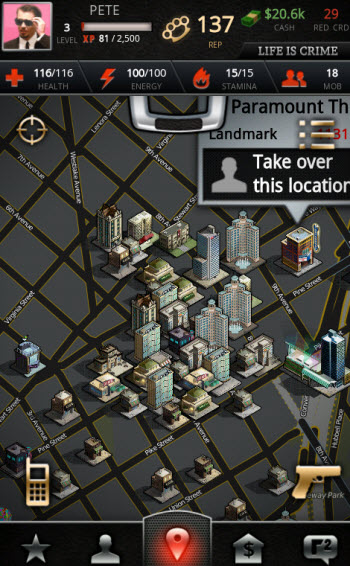 The new funding shows that the stakes are getting higher in social games on mobile platforms as well-known investors and entrepreneurs are backing startups with veteran game developers.

Palo Alto, Calif.-based Red Robot Labs launched its first game, Life is Crime, a couple of weeks ago on Google’s Android operating system. That crime-oriented social game is aimed at both hardcore and casual gamers who like to play location-based games on their mobile phones. The team created the game on the notion that there has got to be more to location-based gaming than “checking in.”

The game uses what Red Robot Labs considers to be one of its primary assets: a location-based gaming platform called R2 Gaming Network that can be used for multiple games.

Life is Crime can automatically put a layer on top of the map that looks and feels like a game (see picture). All of the major locations and landmarks are automatically identified. The map is persistent and it turns everyday places into contested criminal territory.

To perform missions, you have to be within range of about 500 meters or so of the location in question. Then the user can take over the building, rob it, leave loot, or search it for information or health packs. You can also gamble and win virtual currency at a location. Players can reap “protection money” from places they have taken over, and they can try to become the Don of a major city.

So far, the game has an average review rating of 4.4 stars out of five. More than 50,000 people have installed it.

Ouye said that the company will use the money to accelerate its studio growth, further develop R2, partner with third party game developers, accelerate its launch on the iPhone, and create more games.

Ouye teamed up with Pete Hawley, a 15-year game industry veteran, to create the company earlier this year. The team now has 19 people and Ouye wants to expand it to more than 50 by the end of the year. 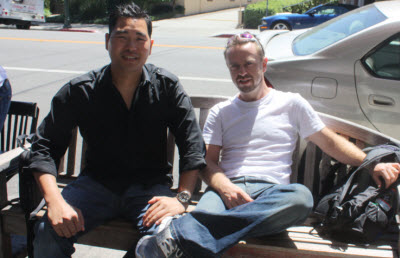 Ouye said the first game debuted at the Penny Arcade Expo in Seattle and it saw lots of usage: the Seattle convention center was the scene of “20,000 crimes, over 1000 hospitalized criminals, $1M in contraband trafficked, and $35 million robbed, stolen and laundered.” I suppose you could say that’s impressive, as far as crime sprees go.

“We’re glad to have access to experienced investors,” Ouye said. “We think that’s going to matter.”