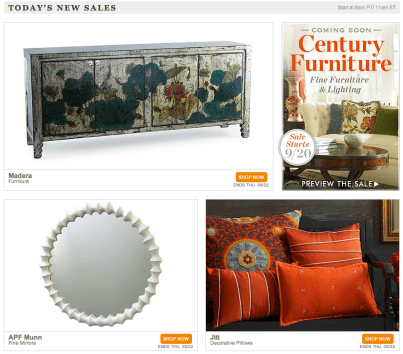 One Kings Lane, a flash deal site that sells high-end furniture and home decor products, announced today that it has raised $40 million in its third round of funding led by Tiger Global Management.

Luxury brands dispose of excess inventory in flash sales to a defined membership, rather than trying to move it in conventional e-commerce channels like Amazon.com, eBay, or their own stores. One Kings Lane then sells those products at steep discounts — usually between 50 percent and 70 percent off the product’s retail price.

Though One Kings Lane grabbed an early lead in the home-furnishings category, it’s facing aggressive competition from Gilt Groupe, a New York-based startup which has branched out from apparel. One Kings Lane has expanded aggressively into lower-priced products with its “Downstairs” flash deal, which sells similar products at even steeper discounts, said One Kings Lane chief executive Doug Mack.

“You’ll see more and more things in Downstairs, we’ve already expanded into the more aggressive price points,” he said. “We haven’t sacrificed the taste and quality and uniqueness of the product.”

Revenue grew 500 percent between 2009 and 2010 and tripled between 2010 and 2011, Mack said. That’s prompted One King’s Lane to triple its engineering staff and hire new customer service representatives ahead of the company’s projected growth. It has made more than $100 million in revenue this year and has more than 2 million subscribers, Mack said.

“There are a lot of companies that have an exciting business concept, but we have an exciting concept and a lot of traction to go with it,” Mack said. “They want to be a part of a company that has real revenue and real results, so we haven’t had to build our engineering team outside San Francisco.”

San Francisco-based One Kings Lane was founded by Ali Pincus and Susan Feldman in 2009. It has raised $67 million in funding to date and has more than 200 employees. Storied venture capital firms Greylock Partners, Kleiner Perkins Caufield & Byers and Institutional Venture Partners also participated in the most recent round of funding.