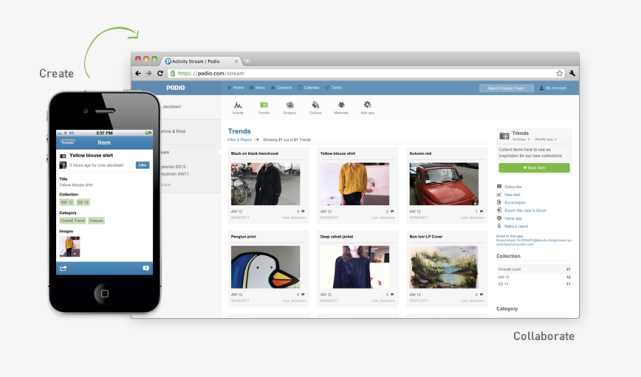 The company’s app builder, which launched back in March, lets users without any technical background easily create business apps, and also gives users access to over 200,000 apps available in Podio’s app store. The Podio platform includes capabilities such as project management, group collaboration and social intranet. It lets users to pick and choose which capabilities they need, so Podio apps can quickly be shaped to best suit different organizations and purposes.

Podio points to a swimming pool repair company in Kuwait, Atlas Blue, which has built an app to let its workers in the field easily update work orders, add photographs, and share data with their colleagues back in the office. You can get a better sense of what Podio’s iPhone app offers in the video below.

The new iPhone app (which has actually been available for a few weeks already on the iTunes Store but which the company only began talking about today), gives Podio customers complete access to apps they’ve created in Podio’s desktop Web interface, thereby giving any company the power to tap into a mobile workforce.

The company also has an Android app available, which appears to offer the same benefits as its iPhone sibling.

Copenhagen-based Podio has raised $4 million in funding from Sunstone Capital, in addition to an earlier angel round.