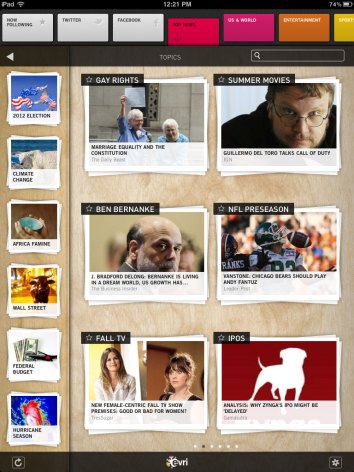 iPad users have yet another news magazine app option with the launch of Evri’s new app on the tablet today, but Evri hopes to stand out from the pack thanks to its unique topic discovery engine.

Evri says its iPad app is the first to offer topic-based news discovery, while competitors like Pulse and Flipboard focus more on collecting stories from specific news sources or your social networks. Evri originally launched at the DEMO conference in 2009 with a semantic search engine aimed at publishers, but now the company is targeting users directly with mobile apps for discovering news.

The iPad app makes finding interesting stories and trending topics easy, thanks to a technology that distills around 2.5 million topics from over 15,000 sources. It’s also easy to personalize, since the iPad app can connect to your Twitter and Facebook accounts. The Evri app will also recommend stories to you based on what you’ve read.

Evri CEO Will Hunsinger tells VentureBeat that the company is now spending most of its energy on mobile apps, including EvriThing Gaming, EvriThing Tech, and SportsStream Football. After recently launching its football app, the company has seen tens of thousands of downloads. Overall, Evri is nearing half-a-million downloads for all of its mobile apps, Hunsinger says.

Evri has offices in Seattle and San Francisco and it has received $8 million in funding ftom Vulcan Capital.