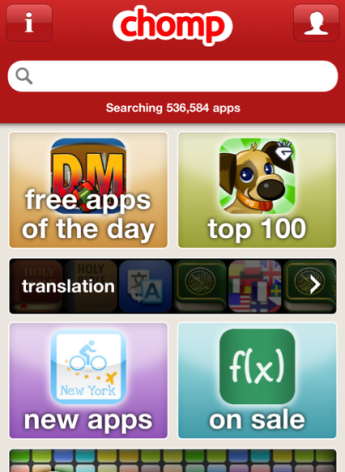 With its latest iPhone app, the mobile app search company Chomp has delivered a stylish new redesign that not only looks good, but will also help you easily find new and interesting apps.

The free Chomp app, available today on the iTunes Store, is a prime example of how an attractive interface can help users better take advantage of existing functionality. It’s also the first in Chomp’s lineup (which includes its Android and web apps) to receive the new look.

“We tried to build a cleaner and faster design for users, so they can get the maximum power out of our search and discovery engine,” Chomp CEO Ben Keighran told VentureBeat in an interview.

The design came about after Chomp spent the last year conducting focus tests and gathering input from users. “Based on their input and what we’ve learned during our time on the market we decided to take another leap forward,” Keighran said in a statement today. “We didn’t limit ourselves to existing best practices or what we’d invested in our previous interface design.”

Indeed, the new Chomp iPhone app looks nothing like its predecessors. As soon as you launch the app, you’re presented with a new search box that offers suggestions, as well as attractive (and useful) tiles on the home screen, including daily free apps, top 100 apps, new apps, and those on sale. Apps are selected for those particular sections using Chomp’s algorithm, which ranks apps based on their downloads, iTunes rankings, search frequency, as well as blog and Twitter chatter about the apps. 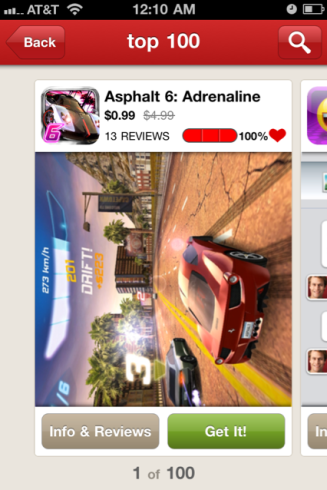 The app’s home screen also features the top 10 app search terms currently trending on Chomp, as well as a button that randomly suggests an app to try out.

After testing Chomp’s new iPhone app for some time, I’ve found it to be much more dynamic and welcoming than its previous versions. The app’s home screen rarely looks the same when you launch it, and the experience of finding apps simply feels more fun than Apple and Google’s app stores, as well as competitors like GetJar and Quixey.

Together with its new iPhone app today, Chomp is also announcing its new search ads product, which will allow developers to bid on keywords and search terms used within its mobile app search. Chomp Search Ads is launching in private beta today, with mobile development startup Milk and local marketplace Zaarly among its first customers.

Chomp is based in San Francisco and has raised about $2.5 million in funding from Ron Conway, Aydin Senkut, David Lee, Auren Hoffman, Brian Pokorny, and BlueRun Ventures.