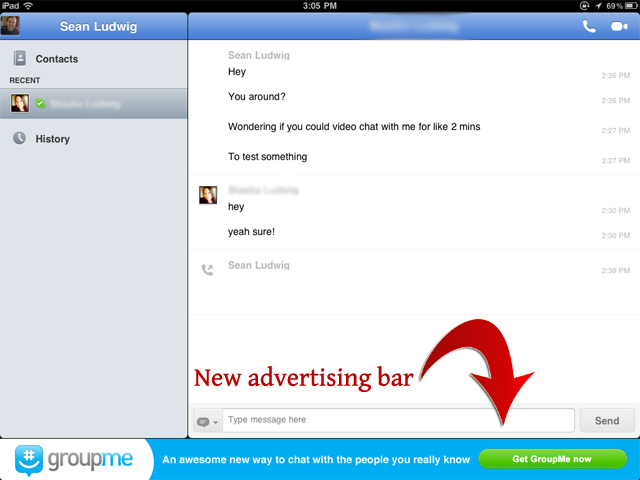 Skype on Tuesday updated its apps for the iPhone and iPad, which now include Bluetooth functionality and image stabilization. Unfortunately the updates also introduce advertising for non-paid users for the first time.

Skype is trying to better monetize its service after Microsoft announced plans to acquire the company back in May for $8.5 billion. While Microsoft product integration is still in the planning phase, Skype is slowly changing into a company that wants to make more cash, perhaps at the behest of its soon-to-be owner.

First, the good news: The apps claim to offer better image stabilization, and Skype for iPhone adds in Bluetooth headset support for the iPhone 4, iPhone 3GS, and the fourth-gen iPod touch, while Skype for iPad now supports Bluetooth for the iPad 2. That can definitely come in handy for anyone who prefers Bluetooth headsets to the speakerphone or regular earpiece.

And now the bad: Take a look at the photo above and you can see a new, somewhat annoying advertising bar that takes up screen space inside of the Skype for iPad application. The ad bar appears for unpaid users while they chat with friends or browse their contacts page. In a test I performed, the app thankfully did not show me ads while I was on a video call. And funny enough, the only ad I saw while testing was for GroupMe, the messaging company Skype acquired in mid-August.

While the advertising is a little annoying, I understand Skype’s rationale for adding it. Most users don’t pay for the service, so the company is trying to make a little scratch with ads. As long as they don’t pop up during my video calls, I’ll be content.

Outside of the ads, the Skype for iPad app is a top-notch video chatting application. In my hands-on with the Skype iPad application, I noted that it blows Apple’s FaceTime app out of the water with better video quality and more versatility. The iPhone app is also generally high-quality for a video chat if you have a strong Internet connection.

What do you think of Skype’s mobile apps?