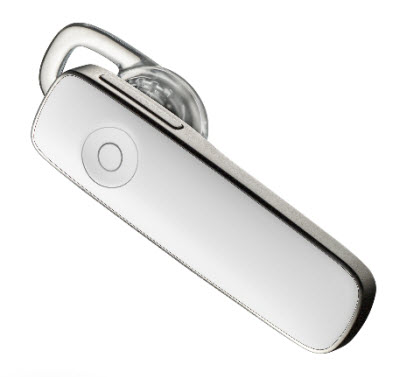 Plantronics is announcing a smartphone headset today that lets you tweet or update your Facebook status with voice commands.

The Plantronics Marque M155 uses the Vocalyst voice service to post to Facebook or Twitter, send emails or text messages, or check the weather via voice command. To answer a phone call, you don’t have to press a button. You just say the word, “answer.” The device shows that even makers of Bluetooth headsets have to offer fancy services and apps in order to differentiate their hardware from other companies.

The headset is capitalizing on the trend toward mobile work. By 2015, more than half of handsets in use will be smartphones, according to IHS Research.

The smart headset will compete with high-end Bluetooth headsets such as the Jawbone devices. In addition to recognizing your voice commands, the Marque M155 can also play audio of your feeds via your phone so you can catch up on news, listen to sports data, or catch up on your social messages. A year of Vocalyst subscription service comes free with the purchase of Marque, which is Santa Cruz, Calif.-based Plantronics’ smallest headset. It weighs seven grams, or less than most ballpoint pens.

You can use the Marque to listen to music, hear navigation directions, and talk with people. The Marque will work with Android and Apple devies and its app is available in the App Store and and the Android Market. The Marque M155 is available in black or white for $60.