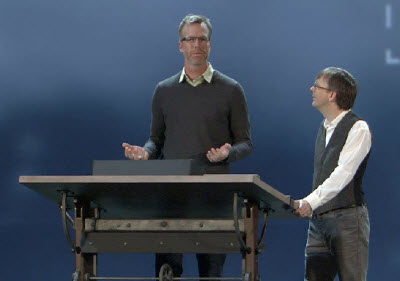 Adobe announced today that it has acquired cloud font site Typekit. Adobe made the announcement just now at its Adobe Max conference in Los Angeles.

Jeffrey Veen (pictured left), chief executive of Typekit, and Adobe chief technology officer Kevin Lynch (pictured right), said the announcement will make it much simpler for artists and designers to get access to cool fonts without having to worry about digital rights issues.

Lynch said the Typekit technology will be part of a larger service known as the Adobe Creative Cloud. The new Adobe service is aimed at letting authors create content in the cloud (web-connected data centers that can host a wide array of services). The Adobe Creative Cloud will have pre-built services for content creators such as e-commerce, customer relationship management, and social network integration. Typekit ensures that a font will work not only with a web site, but with mobile phones as well.

Veen said that Typekit started two years ago as cloud computing was coming to the fore. Typekit created a subscription service to host fonts in the cloud. Designers and developers can pay a fee and get access to a whole library of fonts that will be backward compatible with all sorts of publishing technologies. It also simplifies the process of getting access to the rights for fonts.

Typekit is already used by more than 250,000 customers, including some of the largest sites on the web such as The New York Times, Conde Nast, and IGN. Typekit will be offered as a stand-alone service as well as a part of the Adobe Creative Cloud.

We’ll be exploring the most disruptive cloud trends at our inaugural CloudBeat event on Nov 30-Dec 1 at the Sofitel Hotel in Redwood Shores. We’ll be unveiling some of the most revolutionary cases of cloud adoption by the enterprise. It’s invite only. To apply to come, click on this link.