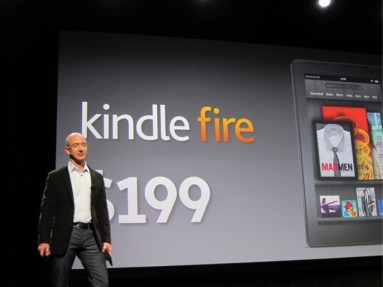 Online retailer Amazon moved 95,000 units of its hotly-anticipated 7-inch tablet, the Kindle Fire, the first day the tablet was available for pre-order, according to estimates from market research firm eDataSource.

Amazon unveiled the Kindle Fire, a tablet geared toward the newly-minted low-end tablet market, on Wednesday last week. Rather than creating a high-end tablet like the iPad or Samsung Galaxy Tab 10.1, Amazon opted for a cheaper device that’s closer to Research in Motion’s PlayBook now that Best Buy has lowered the price of that tablet. Both the iPad 2 and the Android-powered Samsung Galaxy Tab 10.1 retail for around $500 for the cheapest model.

The Fire hits a similar price point that the TouchPad tablet’s fire-sale kicked off when Hewlett-Packard announced it would sell the 10-inch tablet for $100. The result was an almost immediate sell-out at physical retailers and online stores. The fire sale was so successful that HP said it would issue more TouchPads, though the company did not say when they would be available.

Amazon’s new tablet has a dual-core processor, a 7-inch LCD screen and runs on a modified Android operating system. The company also has its own web browser called Silk, which uses Amazon’s cloud infrastructure to speed up browsing by pre-fetching and caching pages you are likely to click on.

The online retailer can afford to sell the $200 Kindle Fire for less that it costs to manufacture it (which is around $210) because it will more than make up the difference with sales of media and other retail goods. The Fire gives Amazon a direct pipeline to its customers so that it can push them offers for everything Amazon sells — such as clothing, electronics or even furniture.

eDataSource also estimated that Amazon sold around 25,000 models of its new line of Kindle e-readers, priced at $79 and $99. The new Kindle no longer has a keyboard, while the Kindle Touch now has a touchscreen. The 3G model of the Kindle Touch costs $149. The firm made the estimates by analyzing around 800,000 receipts from individuals who have opted in to its service.

The Kindle Fire will be available November 15.