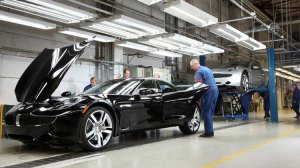 Government-backed electric car company Fisker Automotive is delaying plans for production after missing its early manufacturing goals. According to a report by the Washington Post, the delays are being blamed on regulatory issues, and the company is brushing off any comparisons to Solyndra, another clean-energy company that received half a million in government loans, which filed for bankruptcy in September.

Fisker has already received $529 million in loans from the U.S. Department of Energy to make its plug-in extended-range vehicles. The majority of the loans are going toward the development of the Nina, a mid-priced family car, to be built in a former GM plant in Delaware. The manufacturing delay means that the creation of thousands of promised new jobs will also be postponed. Fisker now plans to start production in 2013.

“Yes there have been delays, but we have created a totally new car, based on a new technology and started a company and raised finance for it in less than 4 years since the company was formed — and all in an economic downturn,” Roger Ormisher, Fisker’s director of global communication told VentureBeat.

A $169 million chunk of the government’s loan has gone to development of Fisker’s Karma, a luxury sedan made in Finland that costs $96,000 (pictured above). However, even though the factory is in Finland, Fisker and the Department of Energy say the loan money is not being spent abroad, but rather in the U.S. on design, engineering and integration.

The Karma has just been cleared for sale in the U.S., two years late and without meeting its promised efficiency standards. Last week the EPA gave it a rating of 52 miles per gallon in electric mode, and a low 20 miles per gallon in gas mode. Only 40 of the cars have been shipped to the U.S. from Finland, but the company still plans on ramping up production to 15,000 cars a year.

The Obama administration’s $38.6 billion loan guarantee program for green-energy companies is part of a “green jobs” initiative that was supposed to create or keep 65,000 jobs. So far it has given out half its loans and created 3,545 full-time jobs, according to the Washington Post. The failure of solar-panel manufacturer Solyndra in September thrust the program into the spotlight, with many questioning the decision to tie investing in unproven and emerging green technology companies to job creation. It’s likely that all of the program’s loan recipients will be closely scrutinized.

The Department of Energy has adjusted the terms of its loan agreement with Fisker to accommodate the delays. Fisker Automotive’s founder, Henrik Fisker, told the Washington Post of comparisons to Solyndra, “This is completely different. You can’t compare at all.”

Fisker Automotive has raised over $600 million in private equity financing, the majority of which has been used to create jobs, including 650 in Calif. and 100 in Delaware, according to Fisker.