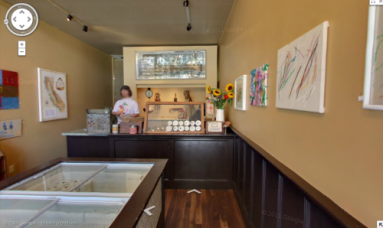 Google is taking its Street View feature indoors. The company announced last May it would be taking interior shots of stores, but now it is moving out of its pilot phase with more 360 degree interiors cropping up online.

Street View on Google Maps has provided many hours of novel entertainment in looking up houses, friends’ houses, your elementary school, that park you fell asleep in that one time. But satisfying a small bit of voyeurism is not all Street View can accomplish. Now Google is using these images as a marketing tool for businesses that want to show off their interiors.

In order to have your businesses’ interior photographed, you must fill out an application with Google. If chosen, you will be contacted by Google’s photographers to set up a time for the shoot. Google owns all rights to the photos, including the right to keep one up, even if you object to it. In order to have an image removed, you must submit a request for it to be taken down. Google asks that you tell customers and those in the area you are holding the shoot on the day it happens. If people are in any of the shots, Google will blur their faces or simply not put the photo up.

According to a Google spokesperson, the company has already worked with thousands of businesses to shoot these 360 degree interior views. Photos will be available both on your Google business page as well as the Google Maps Street View.

Seemingly, this is not a “privacy” risk because you are consenting on behalf of the business to the photographs. However, as a commenter on Hacker News points out, there is potential for criminals to use the interior shots as a way to “case the place,” or find out information before robbing it.

“This one’s my business,” said Nathan Kurz, chief executive of Scream Sorbet, shown in the photo above, “They came to shoot the interior as a perk for participating in a “Google Offer”. I think this is how they are rolling it out, at least in the Bay Area. To me, the results came out fine, although I worry that it now makes ‘casing the joint’ a little easier.”

This could be a non-issue as anyone can walk into a store and look around, but having 360 degree shots on Google does make the information more readily available.

“It would only become a problem if all businesses had [interior photos] and then you could go down the block [on Google Maps] and see who doesn’t have an alarm,” Kurz said in an interview with VentureBeat.

This is a step forward for marketing purposes, but what if homes were next, would you let Google in?