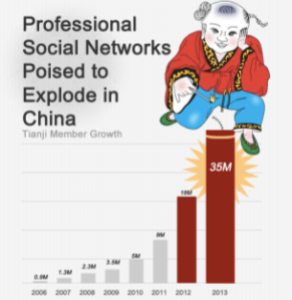 Internet use is driven largely by young people in search of entertainment content, and the concept of doing business with strangers is completely foreign to the culture, so the startup had some real hurdles to cross. However, with 8 million users, Tianji, which means “worldly connection” in Mandarin, is seeing the idea catch on with the Internet’s largest user base. The site is adding 380,000 new users per month.

Because of cultural mores, Chinese people need an “excuse” to start mingling with strangers, but just like everyone else, they really do want to, Ling told VentureBeat. “When you create an environment where people can interact and get to know each other, the business part takes care of itself,” said Ling.”People are good at leveraging their relationships once they feel comfortable.”

Tianji has released an infographic with key findings about business social networking behavior in China, a country with more than 500 million Internet users, and 35 percent overall penetration.

Tianji is focused on a core group of web-savvy Chinese professionals who are younger than 40 but have also graduated college, a demographic that Ling said adds value to the community through its existing contacts and work experience. The site is on track to have 35 million users by 2013. To see the full chart, click on the image above.