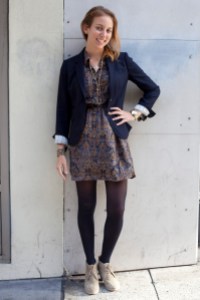 I’ve been asked many times why and how I got into working at a startup. I normally shrug it off and say something like, “Oh, just the right time and right place,” but of course that’s not the whole truth.

Like many a young person with big dreams, I arrived bright-eyed and rosy-cheeked to San Francisco with plans to be part of something big and exciting. I even had an idea for a start-up of my own that I just knew would be the next Twitter (actually I’m still kind of convinced it will be).

And so I set out to get a job at a start-up. Easy, right? Not so much.

The first crush of reality came when a seasoned San Francisco tech industry veteran told me that with my interest in editorial content, I’d be better off looking for a job at a start-up in New York City. I was told that techie engineering companies and sales firms mostly dominate the San Francisco/Silicon Valley start-up scene. And I was clearly not an engineer or a salesperson.

A second blow came from my childhood friend who is now a co-founder of InternMatch. He explained that being around the start-up scene – attending demo day events, launch parties, and exciting, groundbreaking conferences – was a lot more romantic than actually working at a start-up. The day-to-day of a start-up is a total grind.

But still I persevered, writing cover letters out my ears and sometimes even meeting people for an interview. About two months passed before I finally found a start-up that wanted to hire me. And that’s the thing: If a company has job postings online, it’s almost too late.

When a start-up is looking to hire, they need people fast. They don’t want to spend a lot of time recruiting. They trust people already in the industry and value referrals highly. So I was lucky enough to find a friend who had a friend who had a start-up that was about to launch and needed more hands on deck, (really, fingers on keyboards).

I promptly took the job. And then I learned another lesson: Not all start-ups are created equal. Some are more serious while others more chill. Some are more engineering heavy and others less so. Some are on ambitious growth trajectories and others just chugging along. And so on.

The one I landed at, let’s call it Bleu Project, was filled with great people, but it was not a perfect culture fit for me. Ask anyone in the start-up world and they’ll tell you that finding a culture fit is totally key. At Bleu Project, people talked about math equations during happy hour, and eating lunch anywhere other than in front of your computer screen was considered sacrilegious. Moreover, the product was something I found interesting, but not all that relevant to me.

I stuck it out for a good seven weeks before I went to meet the team at another start-up in downtown San Francisco. This other start-up was in a super early stage, pre-private beta. From the moment I flew my first remote control helicopter, an almost prerequisite for getting a job at the young-hearted company, I knew I had found my start-up home in San Francisco. The product was something that I could relate to and believe in. Everyone on the team was smart and accomplished but also fun and social.

I eagerly accepted an offer at this early stage company and bid Bleu Project adieu. I was nervous that the people at Bleu Project might be upset with me for jumping ship to go work at a different start-up, but they were quite gracious. And therein lies another lesson about start-ups: it’s a small world where it’s taken for granted that people move around a lot, so everyone wants to remain on good terms.

So here I am now, working at a start-up I love and occasionally “moonlighting” as a columnist here. I’m a start-up newbie, having spent most of my post-collegiate life as a writer and a journalist, and I have a bit of an outsider’s perspective since I spent the past two years living in Vietnam. I’ll be writing regularly about what it’s actually like to work at a start-up and I will even disclose the name of said start-up as soon as we are no longer in stealth mode.

Julia Plevin is a writer and blogger who recently returned to the United States after managing a magazine in Hanoi, Vietnam. She now works at a startup in San Francisco.