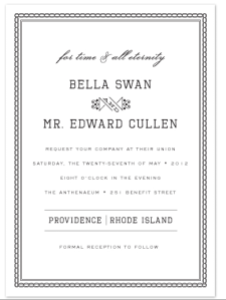 Minted, a marketplace for community-sourced paper products like custom stationery and wedding invitations, has raised a big pile of the green kind of paper you can spend.

For anyone whose parents told them to stop doodling Celtic knots or obsessively repetitive graphic designs and focus on doing schoolwork so they could get a decent job, that must come as encouraging news.

“I love the creativity of the community,” cofounder Mariam Naficy told me today.

Minted has just completed a $5.5 million second round led by Benchmark Capital, with additional investors including IDG Ventures, Menlo Ventures, Jeremy Stoppelman of Yelp and Marissa Mayer of Google. The money will be used to recruit staff and expand into new product lines beyond stationery.

“We always felt that Minted was a design community, more than a stationery vertical,” Naficy said. For instance, many designers also create other products besides the paper products that they sell on Minted, including clothing and home furnishings. Naficy plans to expand Minted to embrace some of those additional cateogries.

“The next thing is to think about any kind of surface or consumer product that we can apply a design to that falls in the realm of decor art and paper goods.”

Minted’s success so far is a sign of health for the design and stationery category, which has become trendy in the past few years. Stores like Papyrus and Paper Source have tapped into people’s desire for a classier, craftier time, when ladies and gentlemen sent thank-you notes on personalized note cards and then probably spent their evenings knitting sweaters or assembling model boats inside bottles.

Based on my experience, it’s easy to spend a lot of money on stationery: I recently went searching for custom note cards and matching envelopes, settling eventually on a slightly homemade solution (a custom rubber stamp and nice card stock) that I hope exudes hipster craftiness more than “too cheap to pay for letterpress.” However, even on a budget I still wound up spending $120 on supplies before I realized what I’d done.

So it’s easy for me to believe it when Minted claims that it’s aiming for a piece of the $10 billion market for stationery, invitations and cards.

In addition, the company is launching an art contest. Three design experts will judge the contest: Alison Pincus, the cofounder of One Kings Lane; Mary Jo Bowling, the editor-in-chief of California Home and Design; and Christina Brian, a blogger at the Full House blog. Those names won’t mean anything to you unless you’re an obsessive design geek — but if you are, you’ll probably be entering the contest for a shot at winning $1,000 and a trip to San Francisco. The three winning designs will also be sold on One Kings Lane as art prints.

Minted, based in San Francisco, was co-founded by chief executive Naficy (who cofounded online cosmetics startup Eve.com in 1998) and senior vice president Melissa Kim. The company now employs 42 people and has raised slightly more than $11 million including the current round.

Naficy characterized Minted’s style as more serious and less edgy than other design communities, such as Threadless. It’s a style that has evolved organically, she said, and to a certain extent independently of the founders.

“It would be hard to change the aesthetic of the community now. It evolves, but it doesn’t change dramatically,” Naficy said.