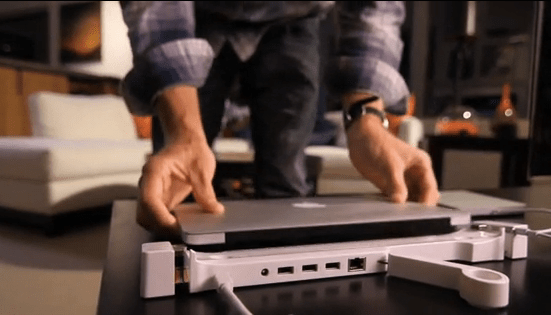 When you think of cool, innovative technology, docking stations aren’t the first things that come to mind. But a young startup called InfiniWing has built an impressive add-on for Apple’s wildly popular MacBook Air laptop that could turn some heads.

InfiniWing plans to target business as well as consumer users with its LandingZone docking station, which lets users plug the MacBook Air in to make use of a larger screen, wider keyboard, and printer. It features four USB drives and a locking system for security.

InfiniWing will be face some stiff competition, since there’s already a whole ecosystem of third-party docking stations for the MacBook Air.

Expand the capabilities of a MacBook Air

The BookArc docking station, for example, is a graceful competitor from designer TwelveSouth that helps to elevate and cool your computer, while also saving desk space. But many  popular MacBook Air docking stations on the market today are ghastly by comparison.

“Many people aren’t using [them] because [they don’t] align with the functionality and aesthetic of the MacBook Air,” InfiniWing founder and CEO Kitae Kwon told VentureBeat. Kwon is a semiconductor design engineer, and he developed the LandingZone, along with the team at InfiniWing.

The company hasn’t begun manufacturing its hardware yet. In fact, it has just put the LandingZone project on funding platform Kickstarter, and wants to raise $50,00o to begin its first production run. Backers who pledge $139 or more will be among the first to get their hands on one. The company has also raised $500,000 in angel funding. It was an AlphaPitch presenter at DEMO Fall 2011, the conference co-hosted by VentureBeat and IDG.

While it’s an object that’s meant to be observed, design alone is not what sets the LandingZone apart from its competitors. The LandingZone makes it easy to connect your computer to your TV to watch movies on a big screen, or power multiple devices such as phones and external harddrives, all while keeping power chords untangled. “We’re addressing real pain points for people,” says Kwon.

The MacBook Air is certainly a good laptop to bank on. It accounted for nearly one-third of all notebook sales for Apple in the third quarter, more than 5 million units. Even HP Chairman Ray Lane was recently outed using a MacBook Air at home in a recent Reuters story, although his company is the world’s number 1 personal computer manufacturer. And laptops are expected to replace more desktops at businesses as companies move to the cloud and rely less on running native apps. Apple itself is aggressively pushing its iCloud service. So the docking station market could well be readying for a good ride ahead.

Should the MacBook Air someday become the dominant Apple laptop for business and pleasure, docking stations like the LandingZone and others could play a key role in making them office-friendly. Will design be a key differentiator? Kwon certainly thinks so.

“It’s very subjective, but at least we can say we have elegant design.” Kwon says.