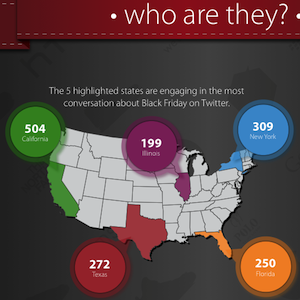 Now that the majority of you have stuffed your bellies with multiple helpings of a delicious Thanksgiving meal, it’s inevitably time to start scoping out deals for Black Friday.

Of course there are plenty of people who don’t care much for Black Friday —  avoiding it at all cost due to the massive crowds. However, last year, at least 212 million shoppers did participate to generate an estimated $45 billion in sales.

To find out about the type of person who chooses to stand outside a Target parking lot at midnight for a cheap Xbox 360 Kinect game pack (and/or name brand athletic footwear, etc.), social media analysis firm MashWork conducted a study based on Black Friday-related conversations from microblogging social network Twitter.

MashWork analyzed over 270,000 tweets referencing Black Friday from Sept. 26 to Nov. 17. The data collected — displayed in the infographic embedded below — yielded answers about what items people were most excited about buying, who they were shopping for and where they plan to make their purchases.

Some of the results actually surprised me. For instance, 46 percent of people plan on buying items on Black Friday for themselves, which sort of defeats the purpose of a gift-giving holiday. Also, the study indicated that computers/tablets and expensive basketball athletic shoes (like a pair of Black Air Jordan Cement 3s) were among the most talked about items.

As for tablets, MashWork notes that the iPad is the dominant device referenced, despite the launch of competing products from both Amazon (Kindle Fire) and Barnes & Noble (Nook Tablet).

“For every 10 times the iPad 2 is talked about in relation to Black Friday, the Kindle Fire is mentioned just once,” the company states in the report. “Shoppers tend to discuss brands on social media that they are engaged and familiar with. Amazon is trusted, but Kindle Fire conversation won’t pick up until more people have used it.”

Check out MashWork’s Black Friday Twitter infographic below for a visual representation of the data from the firm’s study.

Do you plan on taking advantage of Black Friday deals? Let us know in the comments. Also, make sure you check out VentureBeat Senior Editor Devindra Hardawar’s post about the essential Black Friday mobile apps and services for shoppers.