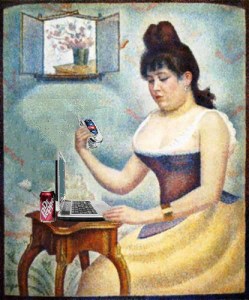 There’s a lack of women in the startup economy, but it’s not a problem.

First of all, if diversity was really a problem in the startup world, VCs would be solving it.  Because VCs like making money, and VCs are great at seeing an opening market and jumping on it.

Second, women are not victims. Women are not powerless. If women wanted to do tech startups, they’d be doing them.

Women don’t want to do them because it is a lifestyle that is renowned for being unglamorous, living hell and completely incompatible with kids.

Recently on VentureBeat, Drs. Scott and Klein wrote about how the lack of diversity in tech startups is a huge problem. They say, “It’s not a pipeline problem,” referring to the gender balance in math and engineering classes. And they’re right. Because women can do startups without any sort of engineering degree. I did three times. But it is a pipeline problem in that women don’t want to do startups.

Startups are a 125 percent job. They take over your life. They are singular in focus, and they are very high risk. These are all things men are much, much more likely than women to enjoy. Most women simply do not want this life.

We know this because, in general, when women have kids, they scale back their careers, and men don’t, according to Catalyst Research. And Pew Research reports that most women who have kids would rather work part-time than either be home with kids full-time or work full-time. With this data, it’s a no-brainer that most women with kids really don’t want startups.

What about women without kids? Women in their 20s outperform men in school for most of their life, and when they leave school, they outearn men (until they have kids.)  So surely women in their 20s feel they can do whatever they want in the workforce.

Also, there is just no solid evidence that there are women who have chosen to do a startup, doing all the work that men have — networking endlessly, living on no salary for years, sharing an apartment with six friends, ending their social life in favor of their work life — and have not had the same results: funding. Women who are willing to do that stuff are probably able to get funding.

The problem is that the funding world is set up to reward behaviors of 22-year-old guys. Living on very little salary, working very long hours, making your whole life your company, traveling at the drop of a hat — these are things people do when they do not have families. It’s a life that guys who are not even in a startup choose because it’s fun for guys. Women don’t choose that kind of life.

So if VCs want more women to do startups they need to change the equation:

So I challenge the VCS to either step up and say they don’t care about funding women or to change the way they fund startups run by women so they can get to the ideas they say the startup world is missing.