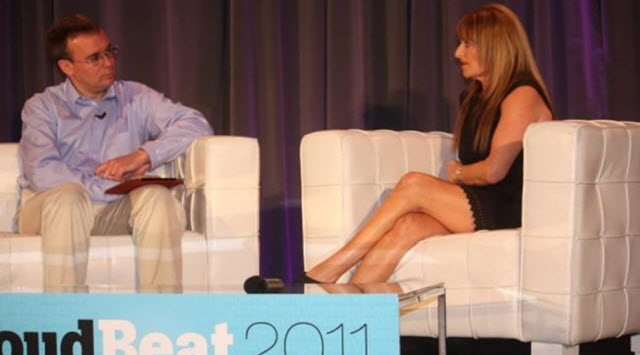 One of the big government weather offices in the United Kingdom tried using Microsoft’s Sharepoint software for collaboration a couple of years ago, but dumped it in favor of the much simpler cloud-based Huddle enterprise collaboration solution instead.

Michaela Drummond (pictured, right), an information management and technology practitioner in the U.K.’s Meterological Office, said at the CloudBeat conference on Thursday that her office adopted Sharepoint, but ran into too many problems with training and complexity. Huddle, which was being used alongside Sharepoint starting two years ago, was adopted instead.

The office has 1,800 employees who provide weather information and forecasting for a variety of government offices, including the U.K.’s Ministry of Defense. The office provides hurricane forecasts and it was able to predict the landfall of Hurricane Katrina within an accuracy of 60 kilometers three days ahead of time. Communicating and collaboration are an essential part of the office’s work.

In conversation with moderator Paul Miller, consultant at Cloud of Data, Drummond said that her office “seriously investigated Sharepoint” and she was in charge of working with office personnel to figure out how to implement Sharepoint, what it was needed for, and what it would enable the workers to do. But it took considerable training to get users to understand it, and that meant that the actual adoption was low. Sharepoint was flexible, but to a fault.

Drummond was assigned to assess Huddle, which was already in use in a large number of government departments. It was already pre-approved by information technology and security staff. With Huddle, a work space could be created in five minutes and training was minimal.

“People who can use Facebook can use Huddle,” Drummond said. “That helped with buy in as well, and it is getting a lot of usage.”

Huddle has now been used in international collaborations for more than a year. The Huddle app is accessible from any web browser and it is available as an iPhone app.