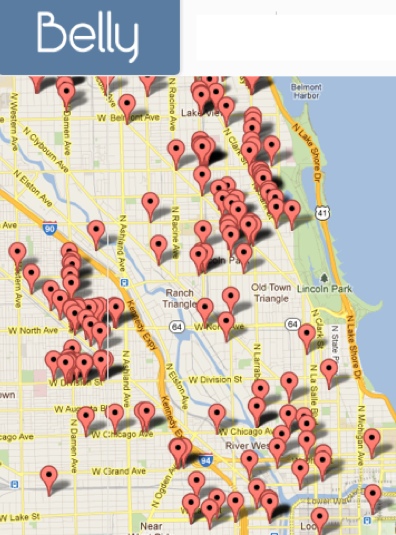 Belly, a loyalty and customer rewards program for small and medium sized businesses, launched today in Chicago, announcing it has received more than $1 million in seed capital from Lightbank, the firm owned by the co-founders of Groupon.

In a way, New Belly can be considered the opposite of Groupon. Groupon is known for helping businesses with customer “acquisition,” and has been criticized for being a pump and dump sort of business — maximizing customers for businesses, but not caring about customer loyalty.

By contrast, Belly tries to offer loyalty. It says it replaces the traditional ‘buy 10 get one free punch cards’ with rewards that “fit the personality of the business and connect consumers on a much more personalized level.”

The company says it will be the first digital universal loyalty program that goes wherever you go: with a single physical card, iPhone App or Android App, that lets you earn points and redeem rewards at your favorite local businesses by simply scanning the card or app on the provided iPad. “Other reward programs don’t effectively cater to both consumers and businesses, and most are horribly ineffective,” said Belly co-founder and CEO Logan LaHive in a statement. “Consumers don’t want to carry several different cards.”

Granted, there are plethora of other companies that are offering digital reward programs, and who are also boasting single physical cards and apps. But the company says its biggest difference is that it also provides training and an in-store iPad with every subscription.

Belly says it is already installed in over 200 businesses in the Chicago area (see the map above; that’s a pretty impressive density).

The company is apparently trying to take some of the whimsy known in Groupon’s marketing, and applying it to loyalty. It’s boasting funny rewards, including one from a comic book store that offers customers a chance to punch the owner in the stomach, to a bakery that rewards customer 10 minutes for all you can eat cupcakes. It also lets you arm wrestle a sandwich restaurant owner or ride along in a food truck that will let its best customers “egg” the truck as it drives by.

Lightbank is the investment firm of Groupon co-founders Eric Lefkofsky and Brad Keywell.

[Update: This story originally called the company by its earlier name, Bellyflop. That has been corrected].
[youtube=http://www.youtube.com/watch?v=wVb5X6_ItjI&w=640&h=360]