Video games for the iPad are an unlikely ally in the fight to help America’s students close the achievement gap in math. But that’s just what startup Motion Math has in mind.

Motion Math is a San Francisco game design studio that creates fun and engaging iPad and iPhone games to teach children mental arithmetic skills. Motion Math: Hungry Fish was released on Thursday, to teach addition and subtraction with the help of a fish who wants to snack on number combinations.

Most educational games teach a single problem-solving method and emphasize the answer. Add 2+2 and you get 4. Hungry Fish inverts mathematical instruction to teach conceptual knowledge.

If the fish is marked with a 7, there are a variety of ways to reach this sum; 5+2, 6+1 or 3+4. Tap the screen to get the fish to chomp on bubbles with the different numbers, collecting points as you go. Part of the fun comes from adding a visceral component to math instruction. And as a result, students learn the process by which they can reach an answer, instead of just memorizing a bunch of number combinations.

“It’s both more engaging, and there’s a lot of evidence that doing the same thing over and over again doesn’t lead to deeper, conceptual knowledge,” Motion Math co-founder Jacob Klein told VentureBeat. Hungry Fish has 18 levels and is even challenging for adults in the later stages, says Klein.

Winning a level allows the player to customize his or her fish with new colors and snazzy fins. Klein says an updated version of Hungry Fish with new levels will be released over the weekend. 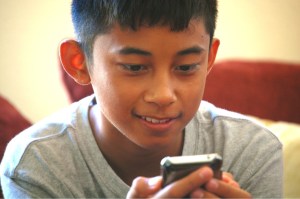 Motion Math also commissioned a study to verify the effectiveness of video games in the mathematics learning process. “It’s easy to make something that looks educational,” says Klein. “We wanted to learn from experts in the field.”

Researcher Michelle Riconscente of the USC Rossier School of Education conducted the study, funded by a grant from the Noyce Foundation and Motion Math. Riconscente’s study observed 166  5th grade students who played the Motion Math fractions game and found that they improved their fractions test scores by 15 percent after playing Motion Math for 20 minutes each day for five straight days. The study also found that students’ confidence towards math problems improved after playing the games.

So perhaps parents have one more good reason to buy their kids an iPad or iPod Touch for Christmas this year.