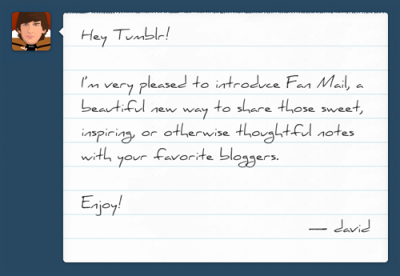 Popular blogging platform Tumblr is out with a new feature Wednesday designed to help its growing user base send private messages to each other.

The new feature is called Fan Mail and it enables Tumblr members to send stylish messages to the blog owners they follow.

Fan Mail will be rolled out to all users in the next few days, Karp added in an update on the release.

Members can send the cutesy messages via the Tumblr inbox, avatar drop-down menus and the top corner of the blogs they follow. Private messaging is a staple of most social media sites, and it should make for a natural addition to Tumblr’s blog platform and already thriving community.

Tumblr currently boasts more than 39 million blogs with a combined total of 15 billion posts. The New York-based startup closed an $85 million round of funding in September.