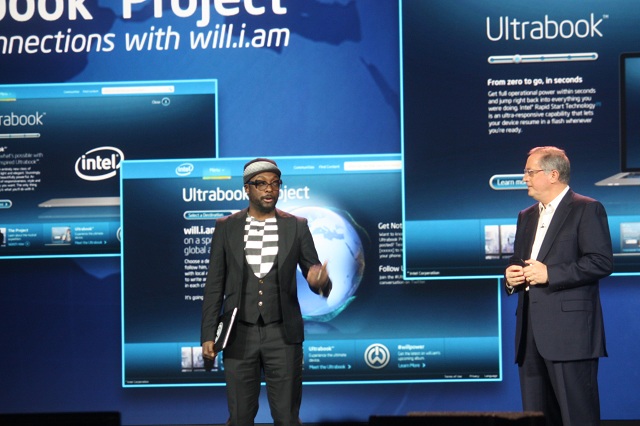 Musician Will.i.am took the stage at the Consumer Electronics Show Tuesday during Intel chief executive Paul Otellini’s keynote speech to talk about how technology is changing the way he makes and distributes his music.

Will.i.am, who is the director of creative innovation for Intel, is carrying around a new Intel-based Ultrabook laptop and using it to craft new songs and sharing it with his fans. He said he has been making music on computers for a long time, but now it is easier to do it while  one the run as he travels the world. Fans can track his movement, and his creativity, online.

Will.i.am, a member of the blockbuster group the Black Eyed Peas, said he is taking an Ultrabook everywhere he goes. He is the midst of an Ultrabook creative campaign as he tours 12 countries, creates 12 songs, and engages in 12 philanthropic ventures to help inner city communities. He says technology can amplify the creativity of the music industry.

“Today, it’s the Ultrabook and this is the new ghetto-blaster,” Will.i.am said, holding an Ultrabook up to his ear.

“I’m proud to be at the center of it and I’m proud to be with Intel,” he said. “You make a song and two months later it comes out. Now you make music on the computer and listen to it on a computer. It’s amazing.”