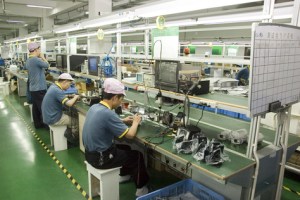 America has been extremely worried about the loss of manufacturing to China. Seduced by subsidies, cheap labor, lax regulations, and a rigged currency, American industry has made a beeline to China.

But the tide may soon turn.

New technologies will likely cause the same hollowing out of China’s manufacturing industry over the next two decades that the U.S experienced over the past twenty years. That’s right. America is destined to once again gain its supremacy in manufacturing, and it will soon be China’s turn to worry.

China’s largest hi-tech product manufacturer Taiwan-based Foxconn Technology Group, made waves last August when it announced plans to install one million robots within three years to do the work that its workers presently do. These robots will perform repetitive, mechanical tasks to produce the circuit boards that go in many of the world’s most popular consumer gadgets. But even these robots and circuit boards will soon be obsolete.

AI is software that makes computers do things that, if humans did them, we would call them intelligent. This is the technology that IBM’s Deep Blue computer used to beat chess grandmaster Garry Kasparov in 1997, and that enabled IBM’s Watson to beat TV-show Jeopardy champions in 2011. AI is what powers the self-driving car that Google is developing and Apple’s Siri voice-recognition software. As a field, AI is now over 50 years old. People thought AI was dead after all the hype it generated in the ‘80s and failed to deliver. But it is fulfilling its potential now.

AI technologies will find their way into manufacturing and make it “personal,” but the technical challenge is simplifying the design process for products that we want to “manufacture” at home, says Jacobstein. Computer-aided-design companies like Autodesk are actively working to make what they call the Imagine, Design, Create-process much easier for mere mortals to perform. These will empower millions more people to join the ranks of the creator economy, where mass production is replaced by personalized production, and people are empowered to specify new products, design, test, and build them.

There is also robotics. Robots used to be a lot like the computers of the 1960s—extremely expensive, huge, slow, finicky, and difficult to program. However, Jacobstein claims that robots are currently in the midst of a revolution in cost and ease of use not unlike the transition from mainframes to personal computers and smart phones. Ten years ago, people would have laughed at the notion that robot vacuum cleaners like the Roomba from iRobot would be in over 6 million homes.