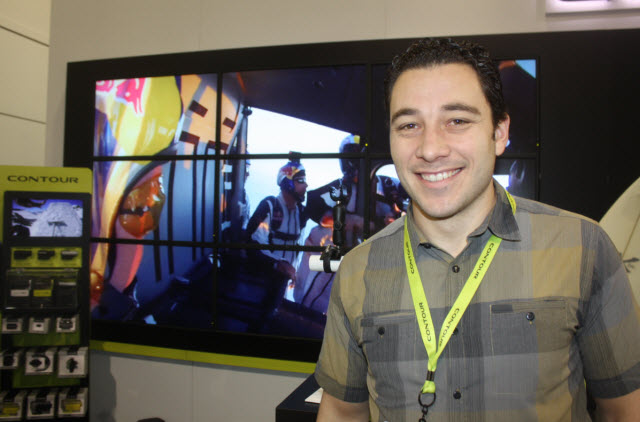 Contour is a fast-growing video camera company that lets you capture your favorite outdoor activities — like skiing down a momentum — at the moment of maximum fun. 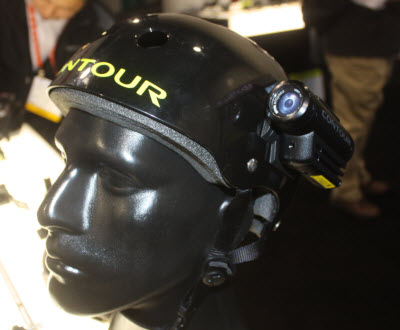 The company announced a partnership with Cerevo that allows you to stream your video live to your friends via Ustream, so your friends can see the view from your helmet or your surf board. Contour made the announcement at the Consumer Electronics Show.

Marc Barros, chief executive of the company, says that the video camera market has been shrinking, but sports cameras are on the rise as people realize they can capture some of the most spectacular moments in life. Contour has been making cameras since 2003 (formerly known as VHoldR) and it has been growing every year.

“You can see speed, elevation, distance etc.,” Barros said in an interview. “We’re leading the way in putting video and data together. There’s a proliferation of sensors and video is becoming easier and easier.”

In the past, helmet-mounted cameras were hard to control because it was difficult to see if they were aimed in the right direction. But, thanks to technology from chip makers Ambarella and Qualcomm Atheros, you will be able to use a Bluetooth connection to point the camera with your iPhone or other smartphone. The Contour Connect App will be free and available in April. Now you’ll always have the right POV (point of view).

“With hands-free, we started this eight years ago so we could record video while we skied,” Barros said. “It’s got to be simple. People are used to Apple products. So we focus on ease of use. Now the traditional video companies are trying to come into this space. We focus on the experiences you can film.”

For livestreaming, Contour partnered with Japanese networking company Cerevo, which provides a LiveShell for $299. You connect your Contour+ camera to LiveShell via a HDMI cable. Then LiveShell takes the camera video feed and allows people to share it via the smartphone in real-time on Ustream. The video is recorded in high-definition 1080p format at 25 to 30 frames per second or at 720p resolution at 25 to 30 or 50 to 60 frames per second.

These new features can be used with the company’s flagship product, the Contour+. Contour also makes the $199 ContourROAM camera, a one-button, easy-to-use waterproof camera. The cameras have built-in navigation and mobile connectivity and can be mounted on any surface.

“It’s all about sharing with your friends,” Barros said. “You want them to be there at that moment. You can tell really rich stories, whether you are a professional broadcaster or not.”

With Cerevo LiveShell and Contour+, the maximum resolution is 480p. You can stream to Ustream via WiFi or 3G connections. With LiveShell, Contour+ has more than two hours of battery life. Cerevo Liveshell will be available on Feb. 1 from Contour’s online store, while the Contour+ is available now. Rivals include GoPro.

Check out our video with Barros below.