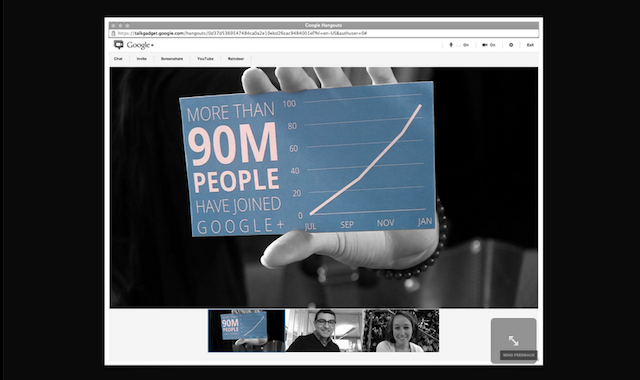 “Four months ago, when we opened [Google+] to the public, we were not sure what kind of reception we would receive,” said Vic Gundotra, Google’s senior vice president of social, on the network. “Expect us to deliver something truly beautiful. We’ve only just begun to work on that promise.”

According to Page, who announced the new numbers during Google’s fourth quarter 2011 earnings call, Google+ has released a new feature every day since its June debut. Additionally, the social network is seeing huge engagement with 60 percent of users being active on the site daily, 80 percent active weekly. More businesses are hopping on Google+’s brand pages as well, totaling at around one million signed up so far.

Paul Allen, a self-proclaimed Google+ analyst, predicts that the company will see 100 million users by the end of February 2012, and a whopping 300-400 million by the end of the year. This, in Allen’s opinion, is due to in particular to Android growth, which still beats iPhone in the smartphone race. Allen also believes that integrations with the growing Chrome browser will rake in more users.

One of Google+’s biggest new integrations has been Google’s bread and butter product: search. “Search Plus Your World” as Google calls it, automatically populates Google searches with results from Google+ including photos, posts, and profile pages. The decision stirred antitrust accusations last week, but Page is still “really excited about it” and sees search as another growth opportunity for the social network.

“I really like it,” Page said of Search Plus Your World, “And I encourage all of you to try it out too.”

Facebook, on the other hand, is still the reigning social network king at 800 million active users. Digital analyst firm iCrossing predicts the giant will reach 1 billion active users by August, right around the time Facebook’s IPO is expected.