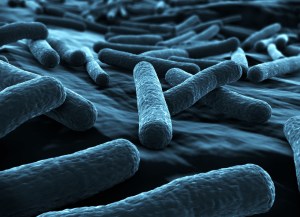 The next time you get an order of miso soup, take a look at the seaweed lurking in your bowl. That same type of seaweed could some day power your car.

Scientists from Bio Architecture Lab, Inc (BAL) and the University of Washington in Seattle have found a way to turn seaweed into fuel with the use of genetically modified Escherichia coli, most commonly known as E. coli, the Scientific American reported. E. coli is a bacteria that can show up in food and make humans ill.

In the last few decades, there has been a push to create biofuels — fuels derived from plants and grasses — to replace fossil fuels. For a while, corn was a major biofuel player. It could be transformed into corn ethanol, a fuel that could be use in flex-fuel vehicles such as the Ford Fusion and the Dodge Ram Pickup. While corn ethanol seemed like an obvious solution, it’s not as environmentally friendly as it was once touted to be due to amount of land needed to grow the crop and its impact on food production.

This is where seaweed comes in. Because seaweed grows rampantly in the world’s oceans, it takes up no land space and doesn’t affect food production like corn does. Seaweed also grows without any help from humans; relying on ocean water for nutrients with no need for fertilizers or pesticides.

The team of scientists genetically modified a strain of E. coli to digest the sugars found in kombu — an edible kelp often found in miso soup — and turn it into ethanol. Once modified, the team tested the new E. coli by adding it to a solution of water and ground up kombu and letting it sit for a few days.

After sitting for two days, the E. coli had broken down the kombu into a solution of ethanol and water. The entire process took place at a relatively low temperature; around 30 degrees Celsius or around 86 degrees Fahrenheit, meaning excessive heat would not be needed to covert seaweed into fuel on a larger scale. The full study was published in the January 20 edition of the journal Science.

Yasuo Yoshikuni, the co-founder of BAL and one of the researchers for the project assured that this new strain of E coli wouldn’t be able to get loose and consume all of the seaweed already growing in the oceans. “E. coli loves the human gut, it doesn’t like the ocean environment,” Yoshikuni told Scientific American, “I can hardly imagine it would do something. It would just be dead.”

While the prospect of moving away from fossil fuels and corn ethanol seems appealing and environmentally friendly, turning seaweed into fuel does open up the possibility of the oceans being exploited. It’s no secret that overfishing is a major problem plaguing our oceans, with too many fish being caught for human consumption. If scientists move forward with creating ethanol from seaweed, hopefully it won’t be at the sacrifice of the world’s oceans.