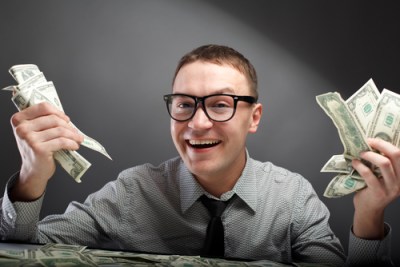 A whopping 96 percent of Google‘s $37.9 billion 2011 revenue came from advertising, but who is putting all that cash in Google’s wallet?

Google is best known for its web search product, which has completely overturned how we research and find answers. But the search itself is only the basis upon which its golden empire has been built. Advertising based on search, as well as banner advertising on websites touches nearly every industry. It even created the jobs of the search engine and display marketers, whose responsibilities include understanding Google AdWords and Adsense, as well as navigating the strategy behind bidding and maintaining ad campaigns.

In 2011 the industry which used Google’s advertising the most was the finance and insurance industry with $4 billion handed over to Google. State Farm topped the charts at a whopping $43.7 million spent. The most common search term in this industry with the highest cost per click was “self-employed health insurance,” which charged advertisers around $43 for every time someone clicked their advertisement.

The retail and general merchandise industry holds second place for most spent on Google ads, with Amazon leading at $55.2 million spent. You would think that number would be so high to accommodate Amazon’s recent debut of the Kindle Fire, but the most commonly search for keyword in the retail industry was actually “Zumba dance DVD.” If we learn anything from common keywords it’s that the economy is down, so people are self-employed and want to dance at home for exercise.

Travel and tourism came in third with $2.4 billion spent on Google advertising. Jobs and education came in fourth, and home and garden in fifth.

Check out the infographic below for more on who contributes to Google’s huge wealth.