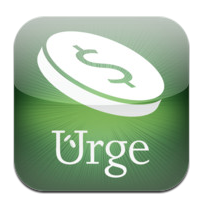 While personal financial services like Mint.com offer a pretty dashboard with detailed information about how your money is spent, they does little to prevent the powerful emotional responses associated with impulse purchases. For instance, the knowledge that you’ve already spent $50 at Starbucks this week won’t prevent you from buying yet another cup of coffee under the right circumstances — (especially if you’re a drowsy journalists working on deadline).

New startup Urge plans to address the emotional side of spending with its iPhone app, which officially launched this week. The concept behind Urge is that people will pull out their phone every time they have the urge to buy something frivolous and record what they would have spent. While the app itself is free, the company offers users an option to connect their bank account to Urge for a one-time fee of $1.99, which will allow them to transfer money from their checking account to a savings account.

“The app may not make people stop drinking coffee, but it might make them change their behavior,” said Urge founder Salil Shibad in an interview with VentureBeat. “So, maybe people decide to buy a bag of coffee from the grocery store that will last them all week rather than spending $5 on a single cup.” 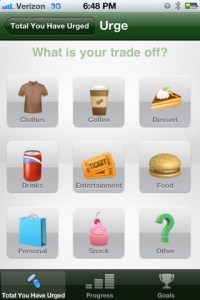 Upon opening the app, you’re greeted with a suggested list of goals to work toward (iPad $500, Kindle Fire $200, vacation $1,000) as well as the option to customize your own goal. One thing to note is that you can only work towards saving money on one goal at a time, which is a good strategy for keeping people focused.

When you encounter the urge to buy something you don’t need, you simply pull up the app on your phone and hit the urge button. When you “Urge”, a screen pops up allowing you to select whatever it is you’ve decided not to purchase (food, coffee, snacks, entertainment, etc.) and enter in the amount the item would have cost. According to Shibad, this is done to both connect users with their emotional behavior for purchases and track what they’re saving the most on.

I’ve tested a number of “expense tracking” mobile apps that give you a comprehensive overview of your spending habits. I usually end up ignoring them after a few days for the same reason I spend too much money on overpriced coffee every week. I know I should stay more aware of my spending habits, but I’m not really compelled to. Urge, however, doesn’t want to track behavior, it wants to become a behavior.

Shibad said the startup is in talks with a handful of large banking organizations to offer an expanded version of the app to bank account holders, which could potentially become a source of revenue. The startup also has plans to add new feature like a donation function that would allow people to use those emotional spending habits by giving money to different charities.

The Nashville-based startup has an initial $15,000 in seed funding from Jumpstart Foundry as well as investment from Shibad, Townes Duncan, and Vic Gatto.