Despite a still sluggish economy, venture capital firms poured a total of $28.4 billion into 3,673 deals last year—one of the highest levels of dollar investments of the decade—with the majority of deals going into the software and biotechnology industries.

The annual figures represent an increase of 22 percent in dollar terms and a 4 percent increase in the number of deals compared with the 2010 figures, according to The MoneyTree Report by PricewaterhouseCoopers and the National Venture Capital Association, based on data from Thomson Reuters.

This year’s VC funding figures represent the third highest annual investment (in dollar terms) of the past decade.

While the overall annual figures were positive, there was a year-end dip: The fourth quarter numbers saw a 10 percent decrease in dollars and an 11 percent decrease in deals when compared to the previous quarter—with $6.6 billion invested into 844 companies last quarter.

Comparing last year’s quarters, the third quarter saw the strongest numbers of the year both in terms of dollar investments and number of deals, with $7.3 billion invested into 953 deals.

The industries that experienced some of the largest dollar increases in 2011, according to data from Thomson Reuters, included

But despite these high increases, the software and biotechnology industries continued to dominate, receiving the largest overall investments of the year according to The MoneyTree™ Report.

Investments by stage of development 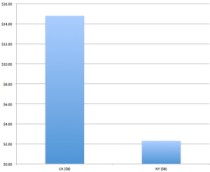 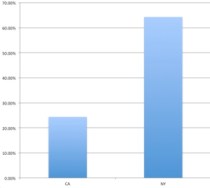 Predictions for 2012: Which industries to watch

According to predictions by the NVCA and Dow Jones VentureSource, the IT sector is the one to watch this year.  Venture capitalists and VC-backed CEOs predict this year will see investment increases in consumer IT, healthcare IT and business IT. On the other hand, VCs predict investment decreases in the biopharmaceutical, medical device sectors and clean technology companies.

Kevin O’Connor, founder of FindTheBest, O’Connor Ventures and DoubleClick, predicted increased investments in the consumer web, energy-efficient devices and the 3D industry. (Disclosure: FindTheBest contributed this article to VentureBeat, and also provides the product comparisons that appear on our site.)

“The consumer Web will see huge increases this year, as well low-energy components and devices,” O’Connor said.  “The crossover hasn’t happened yet, but in the near future our mobile devices are going to become our primary device.  Another industry that will see big gains is the 3D industry, especially in the adult and gaming areas.  On the flip side, I think investing in social companies will be more discerning.”

VC predictions on the presidential elections

Interestingly, when VCs were asked about the upcoming presidential elections, 79 percent predict Mitt Romney would be the Republican presidential nominee with Gingrich coming in a very distant second, according to the NVCA.  But despite strong predictions that Romney will win his party’s vote, 56 percent of VCs predict President Obama will be elected to a second term.

Grace Nasri is the managing editor at FindTheBest.com, a data-driven comparison engine.