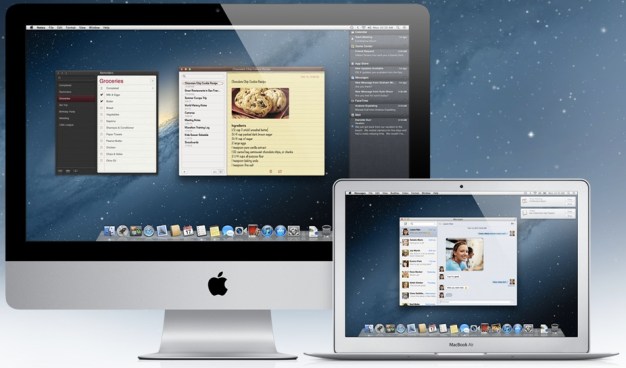 Apple unveiled its next big cat operating system for desktops today, OS X “Mountain Lion,” which shares even more with iOS than its predecessor.

Like OS X Snow Leopard, Mountain Lion (technically OS X version 10.8) is being positioned as a minor upgrade over last year’s Lion release. For the most part, the new OS looks the same, but it also includes apps that first appeared on iOS, deeper integration with iCloud, as well as the Notification Center and Game Center from iOS.

Developers can get their hands on Mountain Lion today in a preview release, but the rest of us will have to wait until this summer for the software. Apple typically holds events to reveal new versions of Mac OS X, so the fact that the company quietly unveiled the OS today is yet another sign that this isn’t a huge release. Apple is also quietly killing off the “Mac” part of the OS X name.

The new OS will bring over iMessage, Reminders, and Notes from iOS, which will all synchronize with their mobile counterparts. Apple is also releasing a beta version of iMessage today, which replaces iChat for instant messaging functionality, for current OS X Lion users. iMessage will let OS X users send free messages to iOS 5 users, and the conversations will also be seamlessly synchronized between mobile and desktop.

Powering synchronization behind the scenes in Mountain Lion is deeper integration with iCloud, which is now also featured on the OS X Finder.

Notification Center will wrangle together all of your application notifications in one spot, much like the popular program Growl. It’ll be accessible from anywhere in the OS with a new two-finger swipe motion. Game Center, not surprisingly, will serve as the go-to spot for all of your games, and will also bring over leaderboards and achievements from iOS.

More than anything, the new Mountain Lion seems dedicated to unifying your experience between iOS and OS X with iCloud. But at the moment, it seems like most of its new additions could have simply been software upgrades to Lion. Expect Apple to reveal more new features for Mountain Lion in the coming months, which will likely justify its standing as a whole new OS.

It’s interesting to consider how Apple is approaching its new OS compared to Microsoft, which is fundamentally changing what a desktop OS can be with Windows 8. Both companies are attempting to bring mobile elements to the desktop, but Apple is taking a more incremental approach (which, admittedly, it always has with OS X), whereas Microsoft is diving headfirst into new territory.

Mountain Lion also adds Share Sheets, which will basically let you share files with services like Twitter, as well as AirPlay Mirroring, which can push whatever is on your screen to an Apple TV. There will also be improvements to how OS X handles apps from the Mac App Store, thanks to new security levels and the addition of developer signatures, which allow the OS to alert you when you’re installing software from unsigned developers.

Apple also isn’t saying anything about bringing its virtual assistant Siri over to Mountain Lion, which for many would be reason enough to upgrade.