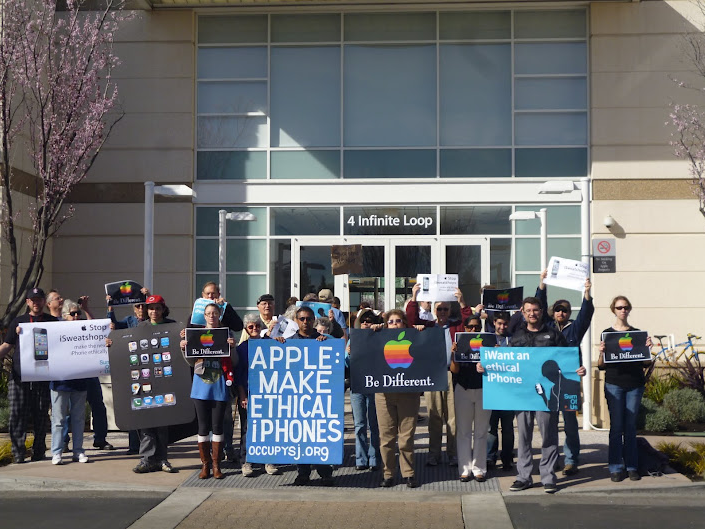 Protesters demanding better working conditions in factories lined up outside of Apple‘s Cupertino headquarters today as the company held its first shareholders meeting since the death of co-founder Steve Jobs.

Rights organization SumOfUs.org rallied protesters at the headquarters to hand out petitions signed by 300,000 people demanding an “ethical iPhone.” The action comes after recent larger reports on poor working conditions in Apple’s Chinese factories. One of Apple’s suppliers, Foxconn, has come under fire for its low pay, long hours, and lack of benefits. Recently, Apple joined the Fair Labor Association, where it will pay for both its membership and the audits, a detail that SumOfUs finds objectionable.

“Ethical consumers won’t be fooled by whitewashing by organizations like the Fair Labor Association,” said SumOfUs.org Executive Director Taren Stinebrickner-Kauffman. ” We insist that Apple grant truly independent NGOs full access to its factories to truly independent NGOs, not groups funded and controlled by the corporations they’re supposed to monitor.”

SumOfUs.org has also published the complaints of two former Apple factory workers who say they were poisoned by an iPhone cleaner, n-hexane, in 2010. The organization held a similar protest spearheaded by the poisoned workers in early February at Apple stores around the United States.

The topic of China was probably on the minds of shareholders at today’s meeting, as well as whether Apple will use its $90 billion in cash to help give raises to factory workers — or dividends to its shareholders at home (the answer was no on dividends). The company is valued at $478 billion. In its first quarter of 2011, Apple made $13.06 billion in profit alone.