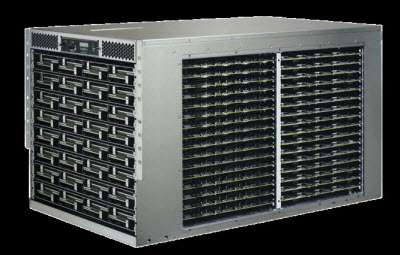 There’s a sea change happening in a segment of the server market dubbed microservers. And Sea Micro has been at the center of it, disrupting the market with energy efficient servers that use lightweight processors from Intel.

Advanced Micro Devices is acquiring Sea Micro today for $334 million, including $281 million in cash. Sea Micro has been disruptive because it can pack a lot of computing power in a server rack that is about a sixth of the usual size. Its servers use a quarter of the usual electricity and cost a lot less.

The servers use Intel’s Atom microprocessors, which are targeted at energy efficient devices such as tablet computers. But AMD’s move could shake things up for Intel, which presumably will lose some of its business.

The advantage of Sunnyvale, Calif.-based SeaMicro’s small and power-efficient computers is that enterprises can now shove a lot more computing power into a given amount of space and use a lot less electrical power, thereby cutting electricity bills dramatically. That matters because electricity costs are the biggest part of the budget for operating data centers.

As we’ve described in earlier stories, Intel has been improving its server microprocessors by making them more power efficient. But the microprocessor only accounts for a third of the power consumption in a server. SeaMicro’s innovation lies in how it attacks the remaining two-thirds of the power consumption problem. It does so by combining a lot of the extraneous chips into a single, more-efficient custom chip, Feldman said.

In its earliest system, SeaMicro put 384 Intel Atom dual-core processors (for a total of 64-bit 768 cores) in a 10-rack system, which is just 17.5 inches high. The newer SM10000-64HD was a 20 percent improvement over SeaMicro’s previous server line and a 150 percent improvement on its compute density record, or the amount of computing power in a given space.

That single machine could replace rival systems with a bunch of equipment: 60 traditional servers, four rack switches, four terminal servers, and a load balancing server. It uses a quarter of the power and a sixth of the space. SeaMicro can put an entire server on a motherboard that is 5 inches by 11 inches. Since the hardware is Intel-based, customers don’t have to change their software at all.

SeaMicro was founded in 2007 and is backed with $60 million in funding by Khosla Ventures, Draper Fisher Jurvetson, Crosslink Capital, and a number of strategic investors. It also won grants from the U.S. Departement of Energy ($9.3 million) and the state of California ($250,000). SeaMicro has 80 employees. Most recently, it raised $20 million.

SeaMicro virtualized a lot of functions that took up a lot of space inside each server in a rack. It also did the same with functions such as storage, networking, server management, and load balancing. Full told, SeaMicro eliminates 90 percent of the components from a system board. SeaMicro calls this CPU/IO virtualization. With it, SeaMicro shrinks the size of the system board from a pizza box to the size of a credit card.