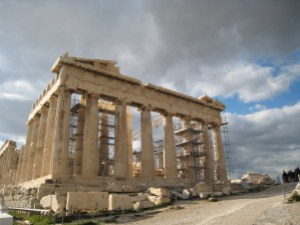 Money is on the Greek mind. With the country deep in debt and the possibility of the government defaulting on it, that’s understandable. It might also be the reason the country’s entrepreneurs are building globally-focused startups that have figured out revenue generation up front.

Unlike innovators in Silicon Valley, who have the luxury of rolling out new ideas with no real plan for making money, Greek entrepreneurs are laser-focused on launching businesses that will put them in the black – fast. And they’re coming up with unique business models to do it — outside of Greece. Greek entrepreneurs are making money by taking their start-ups to the rest of the world.

Dealingers.com is one such example. An e-commerce site founded by Jacko Carasso and Ilias Pantelakis, Dealingers is sort of a reverse eBay. The items it carries are exclusively brand-new, high-end and luxury goods, such as iPhones, iPads and Louis Vuitton apparel. Unlike the popular auction site that markets products at the lowest possible price that then go up as people compete on bids, items on Dealingers start out at full retail. That’s where the “falling price race” begins.

Customers on Dealingers compete to get an item at the lowest possible price, which is in some cases zero, by purchasing clicks. Each click is valued at €1. The minimum packet of clicks a user can buy is €10. The cost of a given item goes down with each click by fifty cents. (The other fifty cents keeps Carasso and Pantelakis in operation.)

“Even if a user is checking the price, they automatically reduce the product’s actual price,” Pantelakis says. They are also contributing to Dealingers’s gross margin.

While Dealingers offers users to compete to get items for free, it also provides the option to purchase an item once it hits half-off. “That’s for the people that don’t want to gamble too much,” Pantelakis says.

Gambling is precisely what the two 25-year old childhood friends are hoping will make Dealingers a hit. Though the platform feeds off of the popularity of on-line shopping and discount sites such as Gilt Groupe and Groupon, it evolves around the success social gaming and gambling have had on the Web. And that has been one of its challenges.

“The legal barriers to this type of a model are really high,” Carasso says. Lottery and gaming licensing is expensive and takes months. Not every country will register this type of a platform.

Carasso and Pantelakis aren’t willing to roll it out in every country. They’re beta testing Dealingers in Germany, Italy, Spain and the UK. They’re working on bringing their platform, registered in Malta, to the United States later this year. But as for their home country? Not even on the radar at this point.

“We’re not considering Greece,” the two Greek founders say. Not only is the market too small (11 million), but “Greeks aren’t big Internet users and are scared of buying online,” Carasso says. The two entrepreneurs are targeting scale. “If we do this right we plan to break even by 2013,” he says.

Scale is what StartersFund is also focused on. An equity-based crowdfunding platform, it is another Greek start-up with a unique business model that is already generating revenue. Like Dealingers, StartersFund also uses a credit system to invest in start-ups or start-up ideas from all over the world. Users buy credits, each also valued at €1, then “vote” for listed projects. “Supporters can vote for as many ideas they like or provide multiple votes for a single idea,” says co-founder Paulius Uza, a Lithuanian national. His partner is Greek lawyer Constantinos Parissis.

“When an idea has received the targeted number of votes, the votes are converted into shares,” Uza says. StartersFund, not the individual, then invests those shares, avoiding the legal and regulatory landmine that plagued equity-based crowdfunding site Profounder, which is now shutting down. StartersFund bears the liability. It does not, however, reap the profits. The company only takes a percentage of funds generated by credit purchases. It gains nothing from any investment, guaranteeing that users are the beneficiaries.

Though it is not, as the company claims, the “first service in the industry that leaves the Do-It-Yourself (DIY) model,” (UK-based Crowdcube is already doing this) it is does act as a pseudo-venture capital firm. StartersFund helps start-ups with legal challenges, accounting and hiring talent. “We follow through on what happens after the funding,” Uza says, in order to ensure a startup’s success. “We aim to be the Swiss Army Knife in the crowdfunding business,” he says, hoping to carve out a mass following that people are confident in. They’ve rolled it out in Greece and are looking to take it to Europe. “We’re watching the U.S. as well, hoping to apply our model once the (crowdfunding) law is passed,” Uza says.

Startersfund will be competing with many other crowdfunding platforms eager to break into the U.S. market, where there is no lack of investors to begin with. How it and its highly human capital-intensive model will fare under such circumstances remains to be seen. What is clear is that it, along with Dealingers and a number of other Greek start-ups, is not wasting any time on launching and iterating as it goes along.

As the European Union drags its feet on releasing a bailout package that would prevent the Greek economy from going bankrupt while also requiring the Greek government to implement steep austerity measures, time is against Greek techies. Their government has already cut key loan guarantees and grants that have marginally helped the fledgling start-up scene. Banks are no longer lending.

“If you look at the total revenues of the Greek stock market, we’re really aren’t in a bull period; there isn’t a lot of money flying around here,” says Georgios Kasselakis, a partner at the Open Fund, a seed investment fund based in Athens. He says if his country’s entrepreneurs are to succeed, they have no choice but to drive revenues from the beginning and think globally.

“They have to come up with business models that generate money immediately because there is no investment community that will give them the slack. No investor in Greece would say, ‘Here’s a million, do your R&D for a couple of years and we’ll talk again,’” Kasselakis says.

In today’s Greece, there is little time for talking. The country is racing in a game of survival.