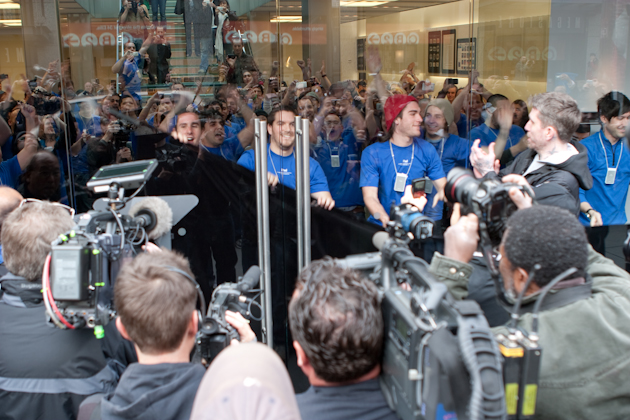 On Friday, stores around the world will be opening their doors to crowds of Apple fans, eager to be the first to swipe their frozen, grimy fingers across the glorious new iPad Retina display. The lines aren’t necessary, you can buy the devices online, but they’re an admirable feat of branding and marketing, and a display of just how hungry Apple fans are to have the latest gadget before anyone else.

If you’re planning on getting a new iPad tomorrow, here’s a guide to help you navigate the madness. The Apple Store isn’t the only game in town. Certified Apple Resellers will also have some units in stock, but the selection and inventory aren’t as dependable. I’d suggest calling ahead to find out how many units your reseller has before getting in line, but all stores (Target, Walmart, Best Buy, Verizon, AT&T, and Radio Shack) say they’re not allowed to share that information. Some won’t even receive shipments until tomorrow, including many smaller outlets such as college campus stores.

Pick your model (and your second choice, maybe third)

Before lining up, decide which iPad you plan on buying. Then, consider what features you’re flexible on since there’s a high chance that your dream configuration will be sold-out.

Color: It’s available in black or white — like anyone is admiring the back of your Retina-display iPad.

Connectivity: The new iPad with Wi-Fi + 4G LTE will be available on Verizon or AT&T. You don’t have to sign up for a data plan when you buy, but you do need to pick what company you’ll be using since each iPad is pre-configured to work with just one of them. If you know which carrier you want, you can go directly to one of its stores and avoid the longer Apple lines.

Trade-in: If you already have an old iPad, you can trade it in when you buy your new model at some sellers. Exact trade-in offers can vary a bit, but for the most part they seem to be competitive. Verizon, Target, and (as of Wednesday) Apple each have trade-in programs for iPads. eBay’s Instant Sale option is another way to sell your old iPad, and the site tells you how much the device is going for at auction. There are other reselling sites like Gazelle, or you can donate it to worthy organizations like Teach for America.

Even though Apple Stores get all the attention, iPads are actually available at a variety of certified Apple Resellers in the U.S. Sure, the line outside of the Norman, Okla. Target won’t have the same exciting rock-concert feel, but it might be much shorter. On the other hand, small stores get shafted in the selection department — many don’t know what they’re getting or how many until the iPads arrive. Here are your options:

Apple stores open at 8:00am local time, but people are already lined up. You can order online anytime, but there’s already a 2-3 week wait. Apple recently added iPads to its buy-back program, which pays with an Apple gift card. The estimated price for a 64GB iPad 2 with 3G is $320. You can calculate the price for your model on Apple’s site. 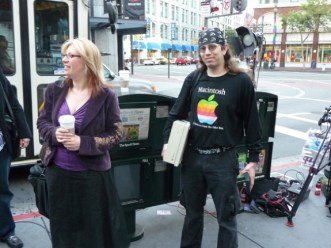 If you’re considering camping out overnight for an iPad instead of just buying it online, chances are you’re in it for the experience or are really hard-up for something to brag about. Apple Retail stores are the place to spend a few chilly hours stretching in place, drinking free coffee, being marketed to by clever companies who couldn’t pass up a captive crowd, and having sleepy conversations with interesting characters (pictured) and like-minded Apple fans.

If you want to be in line when the doors open but don’t want to do all that boring waiting, you can pay someone to wait in line for you. There are offers on eBay and Craigslist, like this person charging $100 for his spot in line at the Los Gatos Apple store (Steve Wozniak’s favorite location).

There are benefits to buying your new iPad in an Apple store. The lines are longest, but the stock is going to be much larger there than at other stores. The staff is also better trained on the product and will be extra knowledgeable and helpful. Apple says each in-store customer will receive a “personal setup” service — a nice addition for those who need extra assistance migrating from an old iPad or setting up their email and apps on an iPad for the first time.

Stores open at 8:00am local time, but online sales begin at 3:01am Eastern Time. Verizon only sells 4G LTE iPad models that work on the Verizon network, and you have to sign up for a Verizon plan on the spot to buy your iPad. Verizon accepts trade-ins, and offers $325 for a working iPad 2, 64GB with 3G.

Stores open at 8am local time. AT&T is only selling 4G LTE iPad models that work on the AT&T network. The wireless carrier is requiring customers to purchase the minimum data plan, which is $25, along with the iPad. AT&T is not accepting trade-ins.

Find an AT&T location near you.

Making the most of the excitement, some 24-hour Best Buy locations will start selling the iPad at midnight. The New York City, Union Square location will begin handing out tickets to people in line at 10pm.

Like the other stores, Best Buy would not divulge how many units it had in stock. However, at least one Florida location has 2,000 iPads, which an armed store employee and accomplice attempted to steal Thursday, along with other Apple products totaling $1.3 million. The pair’s plan was thwarted when they were caught in the parking lot by an off-duty deputy.

Locate the Best Buy nearest you.

Also beating Apple Retail to the punch, Walmart is opening its doors at 12:01am local time at its 24-hour locations. Walmart does offer a trade-in program online through Gazelle, but you’d have to wait for the gift card in the mail. You might as well just buy your iPad online.

Find the closest Walmart for some midnight madness.

Stores open at 8am local time. Target may not be opening at midnight, but the company is rolling out the red carpet for iPad buyers. They’re offering a 5 percent discount to shoppers who use the Target credit card, and are accepting trade-ins on the spot. They’ve said a top-of-the-line iPad 2 can get as much as $350 towards a new iPad, which is about $20 more than most other locations. Exact inventory is, of course, unknown.

Use the Target store locator to find one in your area.

Stores open at 8:00am, but pre-sales have already been available for weeks at some locations (they weren’t advertised). The most overlooked of the iPad retailers, Radio Shacks are supposed to have iPads in stock, but some have already pre-sold all of their units. The lines will be shortest here, but keep in mind that most Radio Shacks typically have a very limited numbers of iPads to begin with. For example, all locations in San Francisco had one shipment of just 50 to share, according to one Radio Shack employee.

Find a Radio Shack and hope nobody else thought of the same thing.