Love was most certainly in the air for digital inspiration board site Pinterest during the month of February.

The newly crowned princess of the Internet was the object of everyone’s attention and saw more than 17.8 million unique visitors in February from the U.S. alone, according to analytics firm comScore. 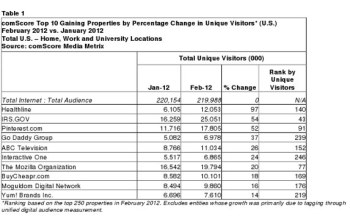 Pinterest, which is technically still in an invite-only private beta, first launched in 2010 and emerged as a top-10 social network last year. The site has continued to pick up momentum in 2012 and could be worth as much as $500 million in a sale. The social network for arts, crafts, fashion, and now food enthusiasts encourages members to “pin” products to collections known as “boards” and has hyper-engaged members.

Pinterest experienced 52 percent month-over-month growth from January, when it had 11.7 million unique U.S. visitors and was the third-highest-gaining web property in terms of unique visitors for the month, by comScore’s calculations.

Palo Alto-based Pinterest has 30 employees and has raised $37.5 million in funding to date. The up-and-coming social site introduced its first major change to the profile page late last week and plans to soon release an iPad application and an API for developers.