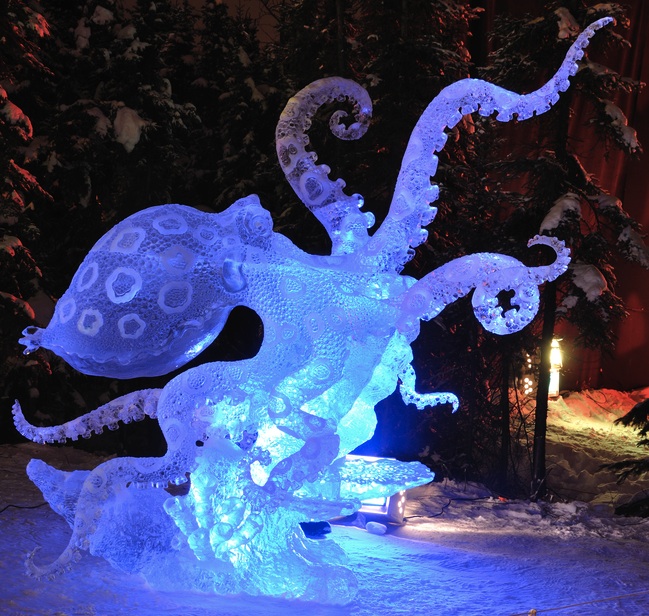 Above: Octopus ice sculpture: Awesome. But if you see it at a startup party, panic.

For someone who’s lived through one tech bubble, it’s hard not to see signs of another one every time the market starts edging upward.

Besides, no one wants to be the rube who’s the last one to realize the party’s over and the cool kids have already left. That’s why so many people are quick to jump to the conclusion that we’re in a bubble.

I’ll admit, the thought crossed my mind recently when I read that a company selling razor blades had raised $1 million from the likes of Andreessen Horowitz and Kleiner Perkins. That was just a few days after I learned one of L.A.’s hottest new incubators was hatching a company offering dog-sitting services.

What’s next? Sock puppets on national TV? Companies competing to ship 40-pound bags of dogfood to you? Someone raising a billion dollars to build a new food-distribution infrastructure so that they can deliver groceries to your door?

Fortunately, the euphoria hasn’t risen to “let’s party like it’s 1999” levels yet. In fact, there are a lot of good reasons to think that the current boom in tech fundings is more well-founded than it was during the dot-com era.

1. The infrastructure is better. In the late 1990s and early 2000s, broadband was scarce and expensive. You had to have a T-1 line at your company if you wanted decent connectivity, and a DSL line that offered a few hundred Kbps at home was the best you could hope for. Now people scoff at the 1.44Mbps that a T-1 line offers, as cable modems offer 5 or 10Mbps to every trailer park in the land, and some are getting speeds an order of magnitude faster than that, thanks to fiber to the home.

All that “dark fiber” that we laughed about in 2001 and 2002 because telcos had built way too much infrastructure? We’re using it now, and it’s one of the reasons Internet access is so cheap and ubiquitous.

2. Entrepreneurs are smarter and leaner. Instead of trying to raise $10 or $20 million right out of the gate and “get big fast,” smart entrepreneurs are far more likely to raise sub-$1 million rounds or even bootstrap their companies. Lean startups and agile development rule the day, enabling companies to move quickly without spending a ton of money. And, because the infrastructure is there (see point #1), it’s easier than ever to outsource development overseas, if you choose, giving you additional alternatives for developing products on the cheap.

3. Companies going public have actual revenues. Well, mostly. There are questions about how sound Groupon’s accounting practices are and how sustainable its profits will be, but the company does have revenues and made a point of showing profits before its IPO. Also, the exception proves the rule. Zynga, LinkedIn, Pandora, and other recently-public companies are all solid businesses with long track records. Facebook, the king of social media, has been remarkably transparent about its revenues and profits, and the business looks pretty good.

4. We’re not putting all our eggs in one basket. As investor Doug Pepper put it recently, during the 1990s people were getting excited about just one platform: the Internet. Now, three huge platforms are under construction: the mobile ecosystem, social media, and cloud services. Each of these is a transformative new way of doing things and opens up possibilities for an enormous number of new businesses.

That said, I think it’s wise to be wary. I have my own personal litmus test, which is the ice sculpture index: How many ice sculptures have I seen at parties or schmoozefests I’ve been invited to in the past month?

It’s an index for wasteful spending, since no one puts money into carved ice unless they’ve got money to burn or they live in Alaska and are really bored. Fortunately, I haven’t seen too many ice sculptures recently.