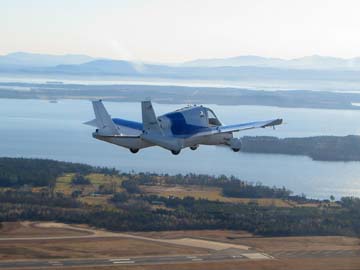 Terrafugia, a Massachusetts company that’s making our dreams of flying cars a reality, has already taken 100 pre-orders for its second-generation flagship model The Transition.

The cars successfully completed their first test flights March 23, and are set to make their public debut later this week at the New York Auto Show. The cars will sell for nearly $300,000 and are slated to be on the roads and in the skies within the year.

Only yesterday, Terrafugia officially took the wraps off the Transition, saying, “From home, to the airport, to where you really want to be. All in the Transition Street-Legal Airplane, all on super unleaded autogas, all on your schedule.”

The Transition is a two-seater that runs on normal gasoline and can be parked in a normal garage. Essentially, it’s a street-legal airplane classified as a light sport aircraft. The pricetag for prospective buyers will be $279,000. That’s a bit more than your average small aircraft, but without the hangar and jet fuel costs to worry about.

“The successful first flight of this production prototype Transition marks a critical move toward initial production and first delivery,” said COO Anna Mracek Dietrich in a release. She added that the prototyping program has included two Transition aircraft and that it’s “being used to develop and inform the manufacturing tool-up and compliance program necessary to begin commercial deliveries.”

Terrafugia, which was founded by pilots and MIT engineers, has taken funding from multiple private investors. The company’s goal is to meet customers’ needs for world-changing but still practical air and land vehicles.