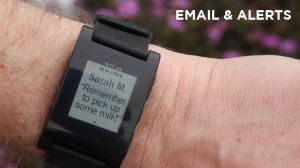 The watch, currently being showcased on crowdfunding platform Kickstarter, is not for sale (yet), but it’s already in hot demand. In just 30 hours, more than 8,500 backers have committed $1.17 million in funds to see the Pebble become a very real thing of connected beauty on their wrists.

There have been other smartwatches. You’ve no doubt heard the rumors that Apple is working on an iOS watch. Well this is different because the watch is not trying to run an OS. By using the phone to do the processing, the watch is basically a semi dumb display that uses your phone to get and process data. However, I say ‘semi’ because you can load simple apps that can execute basic programs, as well as use it as a bike computer, control music on your phone, and create iftt (if this then that) commands to make your own rules for when the phone sends messages to your watch.

Here’s what the makers of Pebble say about the watch:

Apps bring Pebble to life. We’re building some amazing apps for Pebble. Cyclists can use Pebble as a bike computer, accessing the GPS on your smartphone to display speed, distance and pace data. Runners get a similar set of data displayed on their wrist. Use the music control app to play, pause or skip tracks on your phone with the touch of a button. If you’re a golfer, feel free to bring Pebble onto the course. We’re working with Freecaddie to create a great golf rangefinder app for Pebble that works on over 25,000 courses world-wide. Instead of using your phone, view your current distance to the green right on your wrist. These apps will be the first, with more in the works!

Want to code an app yourself? For now you need to write in C, so this not for your amateur coder. But who knows? Perhaps someone will write a Python or PHP layer on top.

The Pebble will retail for $150, but early Kickstarter backers can pledge a bit less to the project and pre-order the smartwatch before it starts shipping.

Interestingly, Sony announced today that it is releasing a similar Sony SmartWatch that connects to Android only. Based on the press release it takes the same approach Pebble is taking, however for $150, on Android only, and not quite as attractive. I’m leaning towards the Pebble.