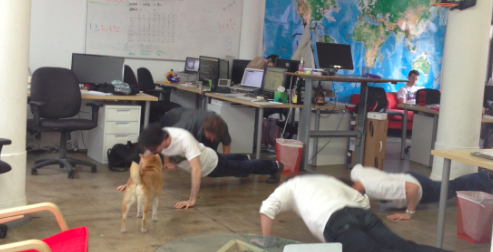 Above: Penny the pooch watches the Chartbeat team get ripped in real time

Another betaworks baby is growing up. Chartbeat, which helps customers measure the traffic to their websites in real-time, is raising a $9.5 million round led by Josh Stein at DFJ and Saul Klein of Index Ventures, who led the company’s seed round.

The New York startup is looking to move out of betawork’s Chelsea building and find its own digs as it aggressively expands its staff. Along with the funding, Chartbeat is rolling out its totally redesigned product today, which we reported on a while back.

I hate Chartbeat. Mostly because I love Chartbeat. I cannot stop looking at it, even when it’s 3:30 in the afternoon on a sunny Saturday, and I’m in the park trying my best to relax. There is no better high in the day to day life of a web publisher than seeing your traffic spike on Chartbeat. But like all the best drugs, it fades far to fast. 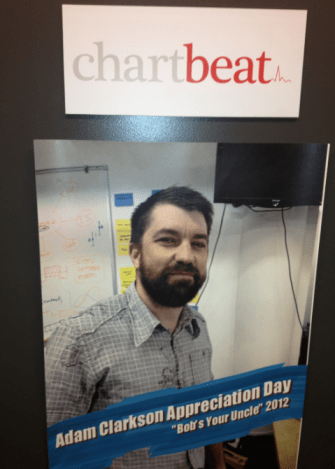 I stopped by the office recently to catch a glimpse of the startup in action. Everyone was wearing identical white t-shirt with the smiling face of Adam Clarkson, Chartbeat’s user experience lead. “It’s his birthday tomorrow, but he wouldn’t let us celebrate that, so we created a day just for him instead,” explained Kate, the office manager, who created the custom tees.

It was just before 10 in the morning and the number of users Chartbeat, measured relative to the size of small nations, ticked above the population of Turkmenistan. The company keeps track of over 5 million users on an average day, watching what they read and what they’re writing on some of the biggest sites on the web: ESPN, Fox News and the NY Times.

The clock struck ten and CEO Tony Haile got down on the floor with a group of staffers and banged out two dozen push-ups. “We do that every hour, keeps the juices flowing,” Haile explained.

Chartbeat still has the feeling of an early stage startup. Haile’s dog, Penny, wanders under desks looking for scraps. The company was bringing in a new hire, a veteran sales executive. But like everyone else on the team, his first challenge was not selling to clients, but learning the product inside and out.

“We’re building him a design challenge, the sort of thing you typically use to hire a developer or UX specialist” explained Haile. “I think fundamentally we believe everyone here should have experience working on the product. I don’t want you out there selling Chartbeat until you’ve got a real sense of how it works and why.”

The business of real-time analytics is booming. In fact, late last year, Google even jumped into the game, adding a real-time service to its widely used Google Analytics. That’s why Haile decided now was a wise time to raise a big round and expand Chartbeat’s services. The company already has the market cornered on premium publishers, but is hoping to expand into real-time analytics for e-commerce and gaming sites.

Chartbeat’s new design, which rolls out today, focuses on surfacing more than just the number of concurrent visitors. “The big goal is to make everyone feel like a data scientist,” said Lauryn Bennet, the company’s head of brand. “We want to make sure the people on the front lines of these sites feel like they can both understand, react and predict how to capitalize on their traffic.”

The emphasis in the new Chartbeat is not on simply measuring concurrent users, which we know from experience is a nasty addiction. You can feel great about watching you page views spike, but the high wears off just as quickly. “The new Chartbeat is focused on letting you know when something out of the ordinary is happening, and helping you to capitalize on that for the future,” says Haile.

While it may not feel that way to reporters and editors who monitor it as closely as their own EKG, Chartbeat is firmly in the Software-as-a-Service category. Haile says a big reason he picked Josh Stein and DFJ as his new lead investor was Stein’s experience with SaaS companies like Box and SugarCRM.

I tell Haile about my insatiable love for his product, and the toll its taking on my mental health and intimate relationships. He smiles. “We’re thinking another valuable source of revenue might be counseling for publishers like yourself.”