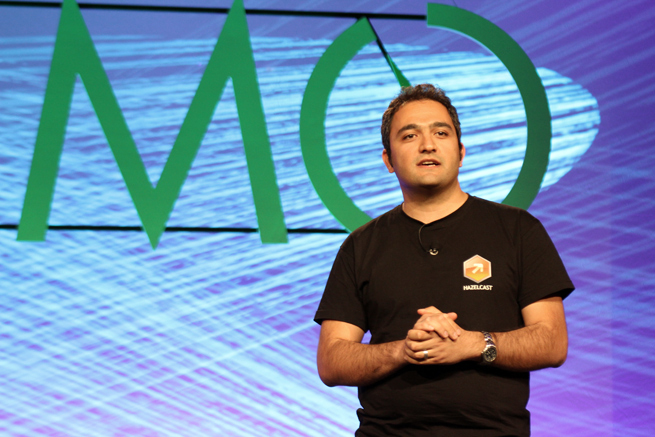 Hazelcast, a five person Turkish startup with an open source platform that makes it easy for companies to create cloud-friendly applications. Blue-chip companies like Cisco, Mozilla, and Ericsson are among its early clients.

Open-source solutions are all the rage for enterprise databases these days. Red Hat just booked its first billion-dollar quarter and announced a big partnership with 10Gen.

Hazelcast is an open-source clustering and highly scalable caching solution. It allows you to easily cache and share application states and partition your application data across the cluster. It is a peer-to-peer solution (there is no master node; every node is a peer), so there is no single point of failure. Applications running Hazelcast will dynamically cluster and create a single system view. Hazelcast also provides distributed executor service to parallelize the processing of distributed data.

Venture capitalist judges at DEMO said of Hazelcast, “To me, [the product is about] scaling out, and that’s the more interesting part of cloud… lashing a thousand nodes together and making an enterprise system, that’s interesting.”

Another VC chimed in, “It is middleware, but it’s a step in the right direction.”

The company was founded in 2008 and so far hasn’t raised any venture capital. The bootstrapping move makes sense, since the startup already has big clients, including some of the world biggest banks, paying for service and support. But Hazelcast is hoping to kick off a round of institutional funding at DEMO.

For anyone interested in learning more, there is a video demo on their site, which we can’t seem to embed, but which you can check out here.

Hazelcast is one of 80 companies chosen by VentureBeat to launch at the DEMO Spring 2012 event taking place this week in Silicon Valley. After we make our selections, the chosen companies pay a fee to present. Our coverage of them remains objective.