Above: From zero to one million users in nine months flat

Banjo founder and CEO Damien Patton has held a variety of jobs in his life, but the career experience that he believes is paying off big at his current startup is the time he spent head mechanic on one of NASCAR’s top teams. “Down in the pit, you learn a lot about how to motivate people to work at an extreme speed under intense pressure, and I think I’ve brought that experience to Banjo’s engineering,” Patton told us during an interview yesterday.

The Silicon Valley startup has hit 1 million users in just nine months. It lets users import all their social networks and quickly browse through all that information based on their location. In part, Patton says, the company’s rapid growth was based on mainstream approach. “We launched from day one on iPhone and Android. We made sure it was available in dozens of languages,” said Patton. “We didn’t chase the early adopters out in the valley, we focused on the average user.”

Banjo is part of a cadre of startups focused on surfacing relevant social information for users based on location. Sonar, Highlight and others are all playing in a space we like to call ambient awareness. Highlight recently raised a round of funding and Sonar launched on Android. But while there is a lot of potential in this area, there is also a lot of risk.

Many users still aren’t comfortable sharing their location or being introduced to strangers around them based on an algorithm. The recent controversy over the Girls Near Me app shows how bad things can get.

“We knew from the beginning that building a social discovery app around a location platform would mean having to think seriously about privacy,” said Patton. “Our policy has always been simple. We respect all the settings you have in place on your social networks. We don’t show anything to people who would not already be able to see it. And we never download or store you contact list.” 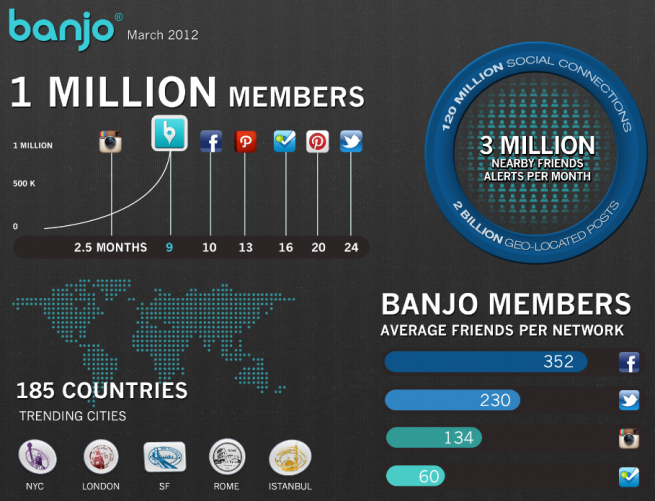