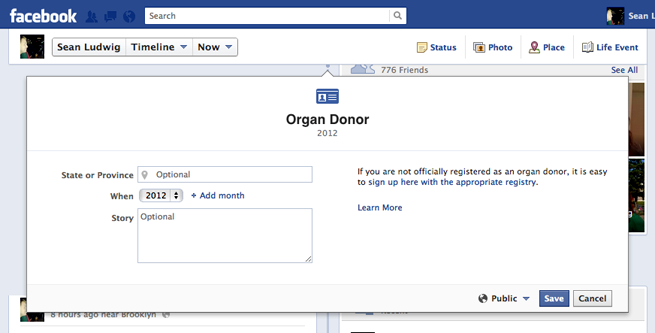 After teasing a new “life-saving” feature yesterday, Facebook has announced the ability to add organ donation status to a person’s Facebook Timeline.

Facebook CEO Mark Zuckerberg appeared on Good Morning America early today to talk about the feature, saying that the idea of it came from having dinner with his girlfriend Priscilla Chan. As Chan is in med school, she has seen the power that organ donation can have on someone’s life. So, Zuckerberg decided to implement the feature on Facebook to better connect friends and families with critical details that could save a life.

“Facebook is really about communicating and telling stories,” Zuckerberg told ABC. “We think that people can really help spread awareness of organ donation and that they want to participate in this to their friends. And that can be a big part of helping solve the crisis that’s out there.”

To add your organ donation status, start by going to your Facebook Timeline.  Then, click the “life event” button followed by “Heath & Wellness,” which will present you with a new option for “organ donor.” As you can see above, you can fill out when and why you became an organ donor. And if you’re not an organ donor, you can find the appropriate registry to become one.

As much as I’m tempted to be cynical about Facebook’s efforts to polish its image before its upcoming IPO, this is a commendable move. With Facebook’s more than 900 million users, it opens up the possibility to get more people interested in organ donation.

Facebook notes that “more than 114,000 people in the United States, and millions more around the globe, are waiting for the heart, kidney or liver transplant that will save their lives. Many of those people – an average of 18 people per day – will die waiting, because there simply aren’t enough organ donors to meet the need.”