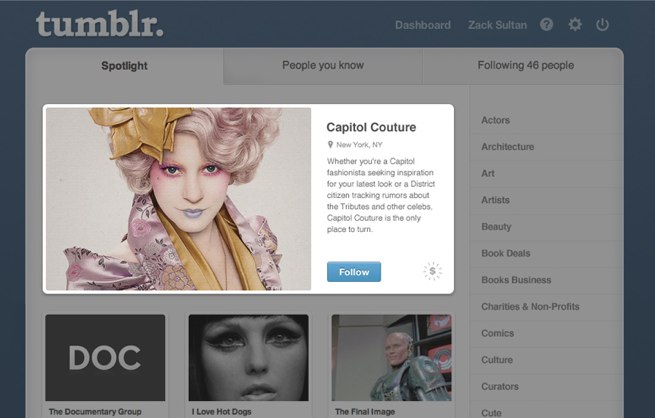 More than five years, $125 million in funding, 55 million users, and 22 billion blog posts later, trendy blogging platform Tumblr is finally getting serious about making money — just on its own terms.

With Radar, sponsors are featured through the company’s curation engine that spotlights top and interesting posts on the network in the right-hand margin of members’ dashboard. Radar pushes 120 million impressions per day, according to Tumblr. 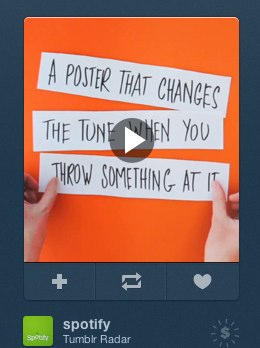 Tumblr Spotlight, a member directory of sorts, is the area where members go to find new people to follow. Sponsors will be featured in a large display above spotlighted members (pictured above).

Together, the products comprise a mini ad suite that echoes the style of ad products offered by Facebook and Twitter. Tumblr promises advertisers thousands of new followers, likes, and reblogs through the promotional placements.

“We are constantly delighted by the creative ways that brands use Tumblr, and are confident that the world’s greatest marketers and media companies will use these products to set a new bar for creative advertising on the web,” a Tumblr spokesperson said in an email to VentureBeat.

Creative is the operative word. The steep $25,000 price point is no accident; it’s intended to keep out junky ads from un-ideal advertisers. In fact, Tumblr is gating its ad platform and will only be working with select advertisers that understand the opportunity, vice president of product Derek Gottfrid told VentureBeat. “We’ve priced this accordingly to make sure we have a really high quality experience,” Gottrid said.

The units, he added, we’re designed to give advertisers a way to buy into the native Tumblr experience, thus requiring a would-be sponsor to invest time and energy in the platform for story-telling purposes. “Our goal is that the experience makes sense for users and sponsors.”

When the ad units do go live, and no hard date has been set, members can expect to see a mix of advertisers spanning categories such as automotive, fashion, and consumer goods.

Even with the emphasis on strong creative and the anticipated launch, Wednesday’s ad announcement represents an about-face for a company that has previously shunned advertising.

Tumblr CEO David Karp has often expressed a disdain for ads. “We’re pretty opposed to advertising,” Karp said in a 2010 interview with the Los Angeles Times. Just this past January, Karp said that Tumblr was pursuing “novel approaches to revenue” in lieu to tacking on ads. Karp, however, admitted to being wrong about ads at an AdAge conference in April.