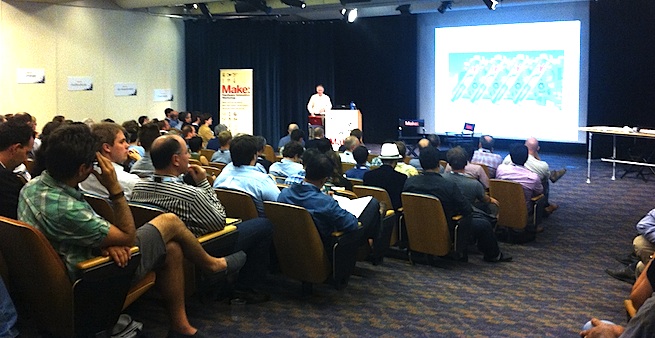 Every year, my family looks forward to Maker Faire, a family-friendly celebration of DIY mayhem, with eager anticipation. But when venture capitalists get involved in the maker movement, you know something new is afoot.

One such VC is Brad Feld, who showed up last week at a “Hardware Innovation Workshop” hosted by Maker Faire organizer O’Reilly Media at Xerox PARC, the storied home of many magical inventions.

The “maker” movement owes much to O’Reilly’s Make magazine, which is like Popular Mechanics for a new generation of Arduino-enabled, LED-lit, UAV-launching DIY types. It’s a monthly magazine packed with hobbyist projects: Everything from making your own homemade cigar box guitar to building a laser CNC router for fabricating stuff. With last week’s day-long workshop, O’Reilly was making the case (pardon the pun) that making can be a business, too.

It was a small but focused gathering of about 150 people, some of whom had come from thousands of miles away. Makers, product designers, artists, entrepreneurs, manufacturers, and venture capitalists talked about bridging the gap between home hardware hacking and building a real hardware business.

“We don’t give a shit about hardware, and we don’t do hardware investments,” said Feld, whose Foundry Group has invested in several hardware companies, including MakerBot Industries, Spheero, and Fitbit. “What we love is software wrapped in plastic.”

Later, Feld moderated his statement, acknowledging that he does care about hardware. But what matters to Foundry, in this case, is whether the company fits into one of its major themes: In this case, human-computer interaction, or the ways in which humans feed data to machines. For that to work, hardware depends on software to help it interface with its human users.

For instance, Fitbit is at first glance a pedometer, but it’s the software and web-based tracking tools that make it stand out as a tool for managing your life, improving your fitness, or even playing games.

For hardware hackers, this is encouraging news, actually. If you can master the hardware and figure out the complexities of outsourcing your production to China, it’s your ability to develop software that will help you forge connections with customers and really stand out.

What’s more, you can make products that your customers can modify, by tweaking the code or writing their own code that works with your APIs.

“The maker movement … has really shifted this dynamic,” Feld said. “Users can create stuff that they care about.”

I suspect for many people, making stuff is mostly a hobby. But for a few über-makers, like MakerBot Industries founder Bre Pettis, making stuff turns into a fulltime obsession, a career, and a company.

Feld told the story of when his firm was first checking out MakerBot, with an eye towards possibly investing in it. Before he’d even met Pettis, Feld got so excited about the idea of 3D printing that he ordered a MakerBot of his own, had it shipped to the office, and spent a weekend setting it up and testing it out. By the time he met Pettis in person, he was already a customer and a fan.

That, Feld says, is a good test for entrepreneurs: “When you meet the VC, has that VC bought your product?”

If not — if the VC asks you to ship a free sample so they can check it out — Feld advises you to run the other direction as quickly as possible. You want investors who are excited about your product as more than just a chance to make money.

MakerBot went on to raise about $11 million in capital and now employs more than 125 people and will soon be moving to Brooklyn’s spacious MetroTech Center. Not bad for a project that started in a hackerspace.

So for a small number of increasingly dedicated entrepreneurs, the maker movement is turning into a platform for innovation and entrepreneurship — and VCs are taking note.

That, I think, is the key to revitalizing the industrial economy in the U.S. and elsewhere.