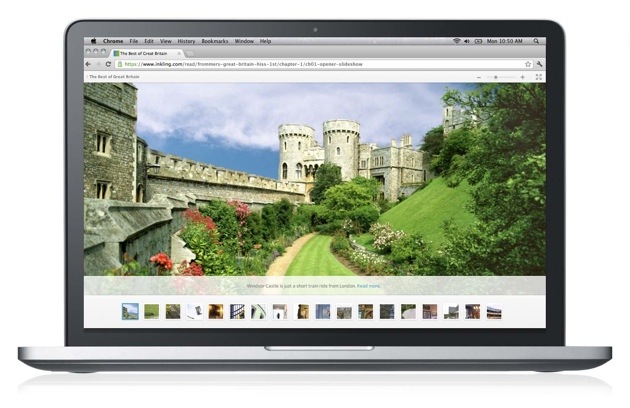 Sorry, college students. Losing your iPad is no longer an excuse for not doing your reading in Inkling’s electronic textbooks. The company today unveiled Inkling for Web, an HTML5 client that will give you access to all of Inkling’s titles in Google Chrome and Safari.

With Inkling for Web, the company is taking its first big step beyond Apple’s iOS ecosystem. Now anyone can buy Inkling’s digital wares, which include travel guides from Frommers, even before it releases an app for Android tablets. (I can’t say that I blame Inkling, given the mostly lackluster sales of Android tablets.)

For critics of Inkling’s iOS-focused approach, the new web reader is a welcome addition — although I don’t think it will do much to convince hesitant schools to adopt Inkling. Reading an ebook on the web via a computer isn’t nearly as convenient as using the iPad.

In addition to being optimized for browsers, Inkling for Web includes most of the features from the iPad app, the company said, including: real-time syncing across devices for notes, highlights, and bookmarks; support for all of Inkling’s interactive ebook features without any browser plugins; and chapter assessments with scoreboards to test your comprehension.

Inkling’s new web reader is also supported by Inkling Habitat, the company’s publishing environment, which can create content for both the iPad and the web with one click.

San Francisco, Calif-based Inkling was founded in 2009 and raised a round of $17 million last summer from Tenaya Capital, Jafco Ventures, Pearson Education, and Sequoia Capital.