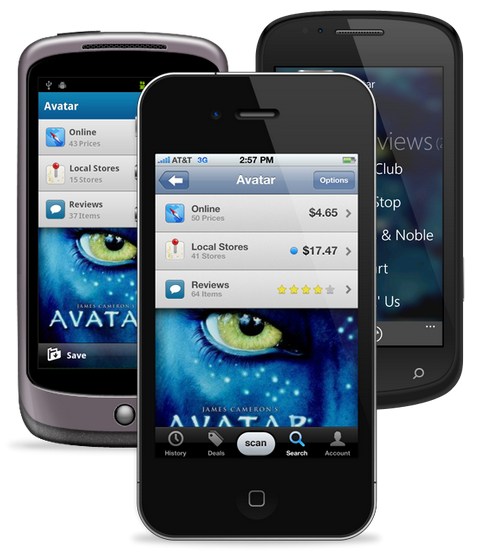 Oh, how the times have changed for ShopSavvy. When the barcode-scanning app first launched on Android in 2008, hundreds of retailers had refused to give up their pricing and inventory data to it. Now that ShopSavvy has proven itself as a valuable mobile shopping tool with over 10 million users, it has amassed a backlog of around 1,500 retailers eager to jump onto its platform.

Aiming to reduce that backlog and make it even easier for new stores to get onboard ShopSavvy, the company is today introducing ShopSavvy Marketplace, which will allow retailers to add their own inventory data to ShopSavvy’s big-data platform, dubbed ProductCloud.

ShopSavvy was among the first apps to let consumers scan barcodes in stores and compare prices among multiple retailers. Consumers love it because it helps them save money, but retailers have also warmed up to the service since it can drive more traffic to their stores. Even if their prices aren’t always lower than competitors, by supporting ShopSavvy retailers have a direct connection to informed shoppers. ShopSavvy also sells ads within its app, allowing retailers and brands to target deals and sales to specific consumers.

So why is ShopSavvy Marketplace so important? Previously, ShopSavvy’s engineers added retailer information to its database manually, a process which has become increasingly unwieldy as the company has grown to over 40,000 retailers in four years.

“Probably around Christmas they realized we had 1,500 [companies] in the backlog and realized they were never going to catch up,” said ShopSavvy co-founder and CEO Alexander Muse, in an interview with VentureBeat. The backlog has been particularly tough for ShopSavvy’s international markets, as it hasn’t been able to add a new retailer in Europe, Asia, or South America in the past year. (Though he notes that recent investor Eduardo Saverin has helped the company expand “significantly” in Asian markets, particularly China and Japan.)

Muse likens ShopSavvy Marketplace to a “self-checkout line for retailers.” Now any retailer, no matter how big or small, can add their prices, inventory, and location data to ShopSavvy without the wait. ShopSavvy accepts retailer data around 14 different ways — including batch files and XML files — so they won’t have to worry about reformatting anything. “We wanted to reduce inertia and have them give us the data as it exists,” Muse said.

Intriguingly, ShopSavvy is also helping retailers to make sense of their jumbled inventory data. Walmart currently has around 8 sources of inventory data that it juggles, Muse tells me, and now that it’s sending all of that to ShopSavvy, it finally has a single location to view that data. This is the promise of big data in action: making sense of a tidal wave of data using the cloud.

ShopSavvy Marketplace is going to entirely replace the need for engineers to babysit new retailer data. The company expects to see a slew of new European and Asian retailers jumping onto its platform now that the process is more streamlined. Given current estimates, Muse tells me that ShopSavvy could potentially add another 40,000 retailers by the end of this year (for a total of 80,000).

Looking forward, Muse says that he envisions ShopSavvy going from a great utility today to “more of a platform or community for shopping, both for consumers and retailers.” The company has upgraded its database infrastructure from SQL to a combination of Hadoop and Cassandra, which means that it can now devour tons of information in true big data fashion.

“Now we can take this big data from retailers and help discover new insights,” Muse said. For example, he points out that the company’s data shows Amazon only has the best price for products around 6 percent of the time — information which could send consumers to other retailers instead.

The company recently launched SavvyListings, an attempt to create a mobile Craigslist-like market for mobile devices. Muse reiterated that the company is planning to integrate buy-back features into the  services (using the same firm that powers popular reseller Gazelle), and he teased that there are some interesting announcements around SavvyListings to come.

ShopSavvy has offices in San Francisco, Calif. and Dallas, Texas, and has thus far raised a total of $11.5 million.