DoubleDutch builds mobile apps to help organizations such as TED, Adobe, and Cisco Systems collaborate and share. Today it’s releasing the app it built to keep its own team engaged, motivated, and on the same page. For free.

VentureBeat spoke with DoubleDutch CEO Lawrence Coburn about the new product last week. The company builds and markets two products: Flock, a top app for events (full disclosure: VentureBeat is using Flock for our upcoming Mobile Beat conference), and Hive, a customer relationship management app. But the team had a problem. 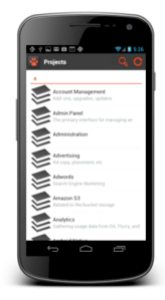 Above: Designed for tapping, not typing

“The DoubleDutch team is very distributed. Pride is an app we built for our own use, to stay connected,” Coburn said. “It provides what we call ambient awareness of what’s going on in the company.”

Pride lets team members share what they’re doing, where they are, exchange messages and information, and give each other virtual pats on the back. Using it has helped the DoubleDutch team stay on the same track, while reducing its internal email use by 34 percent.

The best comparison, surprisingly enough, is Yammer — the company that was in the news this week for a rumoured but not-yet-confirmed acquisition by Microsoft. Yammer provides internal social networks for businesses.

Pride is built for the same purposes, but it’s designed entirely for mobile, and has three key differences: contextual data, structured data, and gamified social engagement.

“Because we’re mobile only, we depend very heavily on context,” Coburn told VentureBeat. For example, “All our customers are tagged with latitude and longitude data.” That means that the app knows when you’re at a client’s workplace, and a checkin can be accomplished in about seven seconds, according to Coburn.

“The second difference is that we depend very heavily on structured data, like a Foursquare checkin, for example,” said Coburn. Whereas Yammer is largely unstructured text-based data, much like the Facebook-stye experience it is emulating, DoubleDutch tried to translate work updates to structural data that can be entered by tapping rather than typing: with a customer, prepping a release, making a brochure. 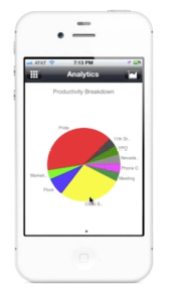 Above: Personal productivity breakdown in Pride

And finally, the company has added gamification to the app. Obviously, this depends heavily on the structural data Pride enforces: it’s hard to award points for a text update that a software app doesn’t really understand.

The benefits are enormous: An administrator for a company can set up behavior the company wants to encourage. Think structured data for a sales force: calling a prospect, completing a customer visit, and so on.

“Now you can set up badges and awards based on what the company wants to reward,” Corburn says.

Which, in turn, enables excellent feedback for users on how they’re doing, with built-in charts and graphs detailing how you’ve spent your time through the days and weeks. And company-wide analytics can be accessed via a web-based portal. That’s a powerful tool for both individuals and companies to monitor and improve personal productivity.

Pride may be more suitable for smaller companies than large enterprises: DoubleDutch is an 18-person team, and most of the beta testing has been with small- to medium-sized companies. In addition, Pride is totally transparent: Everyone at DoubleDutch can see what the CEO is spending his time on, and vice-versa.

“We didn’t want to be a big brother app,” Coburn said.  That’s understandable, and probably even commendable, but it may not sit well with older, traditional companies.

The Pride app is available now and is absolutely free in both iOS and Android versions.

“We have no plans to charge for it,”Coburn told VentureBeat. “Eventually we may roll out some more sophisticated data and analytics that will be paid.”

DoubleDutch is based in San Francisco and has 18 employees. In 2011 the company raised $1.2 million in seed capital from a group of investors including Lightbank, Charles River Ventures, Launch Capital, Venture 51, Accelerator Ventures, and more. 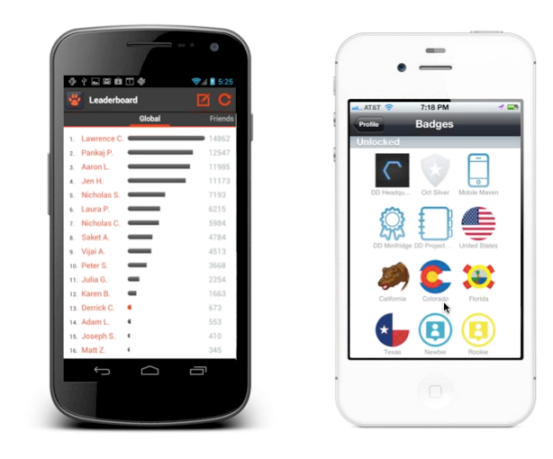 Above: Gamification in Pride 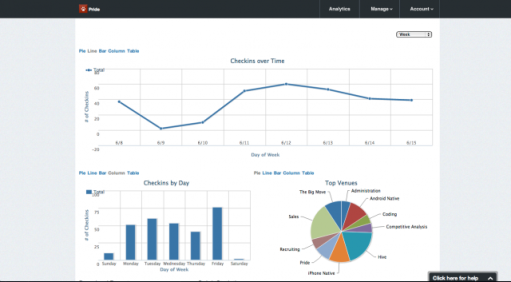